Following on from his appearance in the Telegraph, Mario was very excited to be contacted by Aurora the company that produce the television coverage and DVD for the Revival. Traditionally the shows presenters Amanda Stretton and Steve Rider arrive at the circuit by an interesting form of transport and this year they wanted Steve to ‘arrive’ in Mario. Obviously with Mario being such a shy and retiring beast he took nano seconds to say yes! 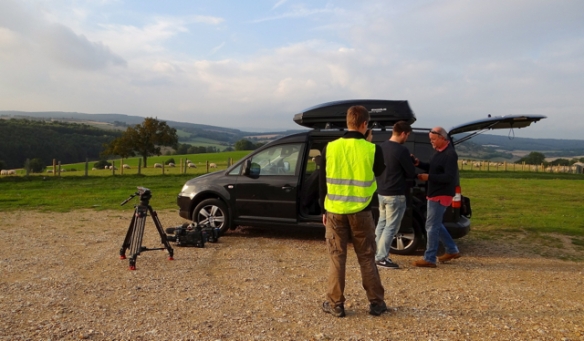 We started filming on Thursday evening when the roads were quieter to get some ‘driving’ footage. James stepped in as Steve’s ‘body double’ sitting in the back while we drove back and forth past the Trundle up at the race course. One of the camera crews was positioned at the top of the hill and the other on the sharp bend. Mario, linked to the crew by radio, just had to wait for a suitable gap in the traffic and then cruise smoothly past. The crew didn’t seem concerned that we were shooting on a sunny evening when the forecast for the rest of the weekend wasn’t good, the technology would take over later and when the footage was mixed together it would all look alright we were assured. For continuity I agreed to wear the same hat and fur stole on both days we would be shooting.

Steve arrived at the circuit on Saturday morning and the film crew started fitting up Mario with five Go-Pro cameras, three inside to film Jane driving and Steve sitting in the back plus two on the outside to capture Mario on the road. Steve is a lovely chap and after many years presenting sport on the BBC and ITV very professional, he personally owns a Fiat 500 and so was very interested in Mario.

With the cameras fitted and activated we set off to drive around the local roads while Steve gave his opening lines before pulling into the circuit and then coming to a halt at the taxi rank. The crew were waiting for us and after removing the Go-Pro’s set up to film the coming to a halt sequence from several angles within the Taxi Rank. 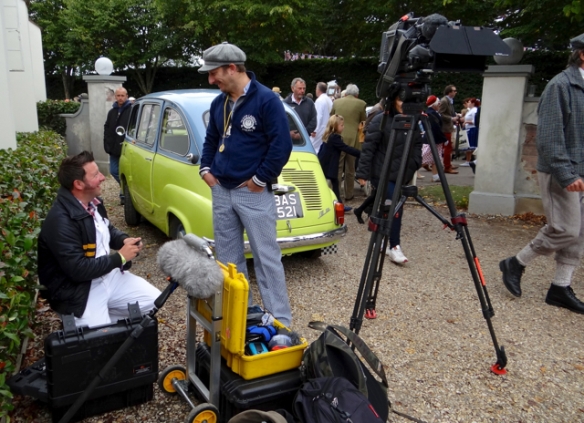 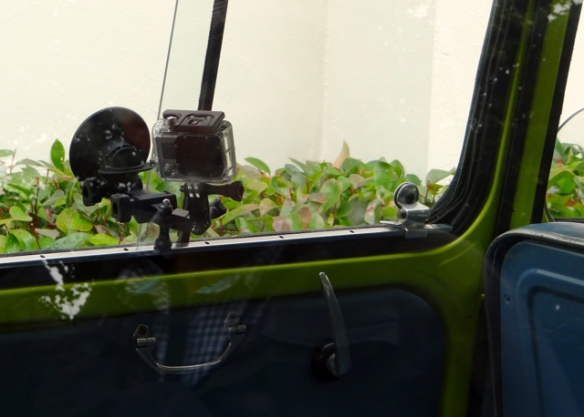 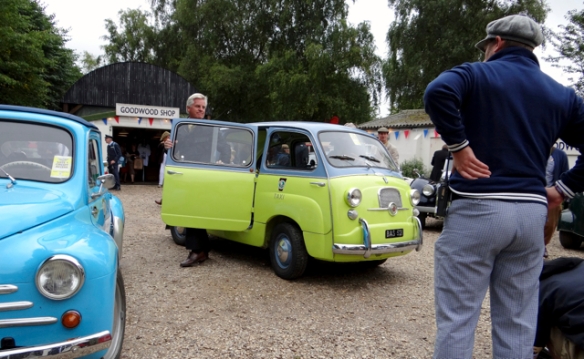 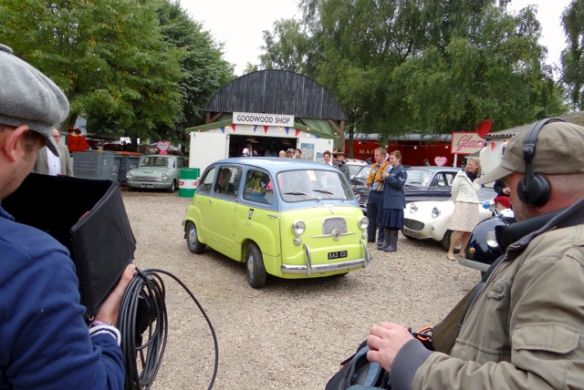 Due to some technical problems we had to do an extra run with one of the external Go-Pro’s and some more footage of Steve’s introduction with a sound man onboard, in all we were filming for about 3 hours over the two days for a sequence which will be just under a minute of the 45 minute TV programme which was broadcast tonight Thursday 26 September on ITV4 and repeated later on ITV1. It was amazing at the amount of work and effort that went into such a short piece of film and how much footage was destined for the ‘cutting room floor’ but was us it was a new experience and an honour to be part of the programme.

We’ve just watch the programme and we were delighted with how the intro turned up, it’s interesting trying to work out which bits were shot where and how cleverly it has all been fitted together, a great job – the rest of the programme wasn’t bad either!

Mario, brother Regie the 4cv Renault, Kato the Subaru 360 and humans ‘work’ the Goodwood Revival as part of the Goodwood Revival Transport Corps, otherwise known as the GRTC. This band of merry volunteers turn up every year with their pre 66 vehicles and help to keep the event running smoothly and the public entertained.

The group includes stationery display vehicles, mods & rockers and the police, who do the track opening, the jeeps, who operate from the gate and get equipment for the race teams from the competitors parking to the circuit and the period taxi fleet of which we are a part. The taxi rank is home to an assortment of cars, original London taxi’s, vehicles from the Vauxhall Historic Collection, AC’s, Humber Super Snipe, Triumphs and so forth. Most of the drivers have been doing it for a number of years and so it has the atmosphere of a ‘school reunion’ with everyone catching up on what’s happened since last year. 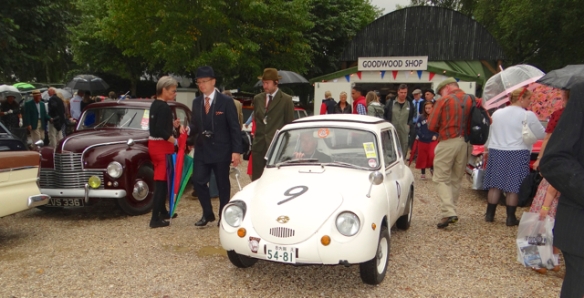 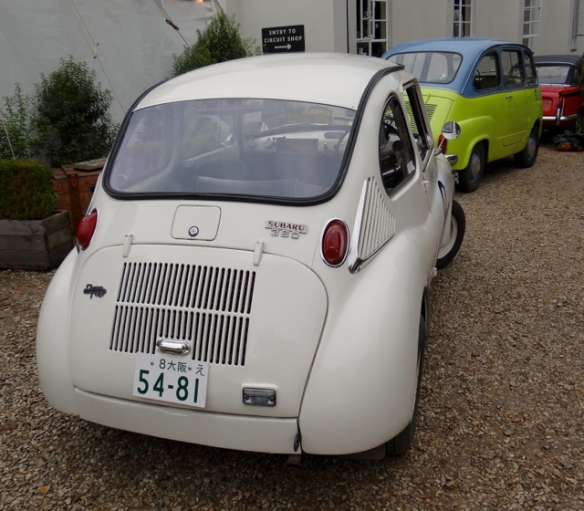 Being a Revival taxi driver is not for the faint hearted, long days, having your picture taken a ‘million’ times, telling the cars story and driving around/between the circuit, house, hotel and the Kennels, this year we completed over 200kms each! 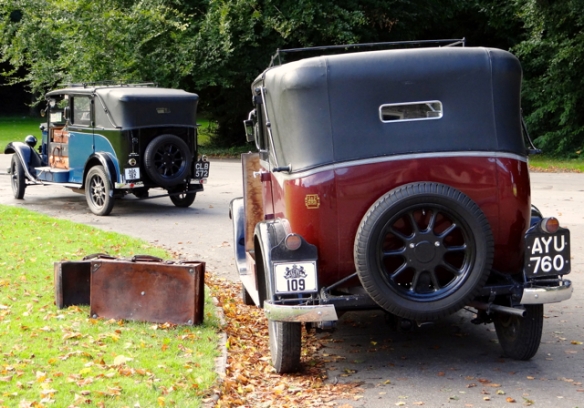 We also have to keep ‘working’ no matter what the conditions and this year on Friday evening and Sunday after about 3.30pm the weather was disgusting! It’s not easy driving the old cars in these conditions, certainly on Mario the lights and wipers aren’t good and he gets all steamed up especially when filled with soggy passengers! We’d used RainEx on the outside which does help but in the future an application of Anti-Fog would be worth doing. We do have an advantage though when the weather is inclement as at least we have somewhere dry to sit. The roads especially at the entrances to the car parks were very muddy and slippery and visitors just ‘wanting to get home’ became a bit of a hazard. A lot of the visitors are very considerate to the ‘working’ vehicles but some are very unhelpful and don’t let us into queuing traffic etc, if only they realised that we might be trying to get a driver to a race on time! 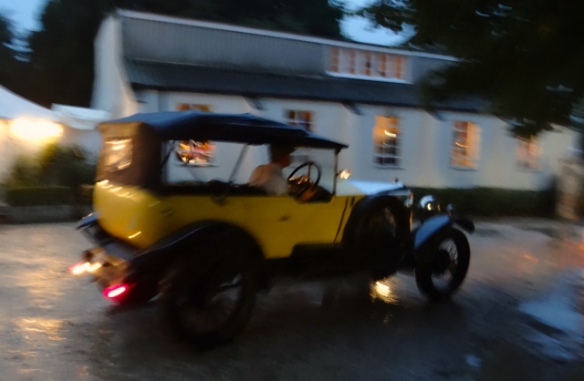 The best thing about being in the GRTC is all the interesting people you get to meet from celebrities, drivers, ViP guests, staff and members, they are all enjoying themselves and so are keen to chat about they and we have been doing. They are often surprised that the cars are our own and that we are volunteers but we always point out that Goodwood look after us well.

As always we had our share of ‘celebs’, our regular passenger Adrian Newey, F1 designer for Red Bull managed to get a lift in each of the three ‘little’ cars, as always he was most charming and for once wasn’t our last passenger of the day! 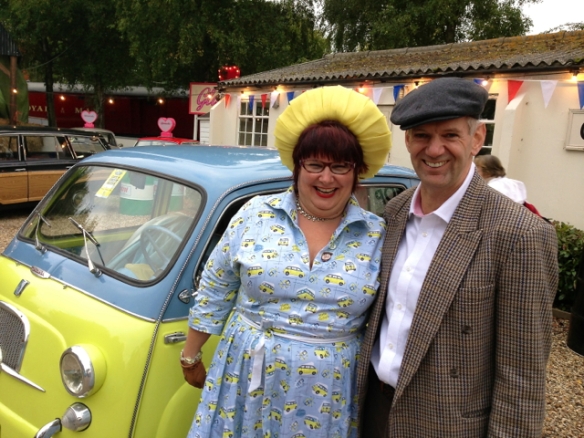 Ex Works Mini Rally driver Rauno Altonen had a ride in Mario and the Renault. Rauno who had driven a Mini in the St Mary’s and a Jaguar E-Type in the RAC TT Celebration wasn’t interested in talking about what he’d been doing, he just wanted to talk about our cars! When James dropped him back at the hotel he spent an enjoyable time discussing the engine and the modifications and maintenance that James had done. We also both took Stuart Graham who raced bikes (winning the TT in the 60’s) and Saloon cars in the 70’s, he also didn’t talk about his experiences in a Galaxie in the St Mary’s and a Chevrolet Corvette Sting Ray in the TT but was fascinated about the cars. All the drivers celebrity and gentlemen alike are absolutely charming and very appreciative of the service we provide for them.

James picked up Sir Stirling and Susie Moss, he has rallied with them in the past so always likes the opportunity for a natter and David Richards, ex driver, runner of Pro-drive and now owner of Aston Martin. Cheeky driver Rae Davis even managed to ‘sweet talk’ us into running him into Chichester on Sunday evening when he couldn’t get a ‘real’ taxi! 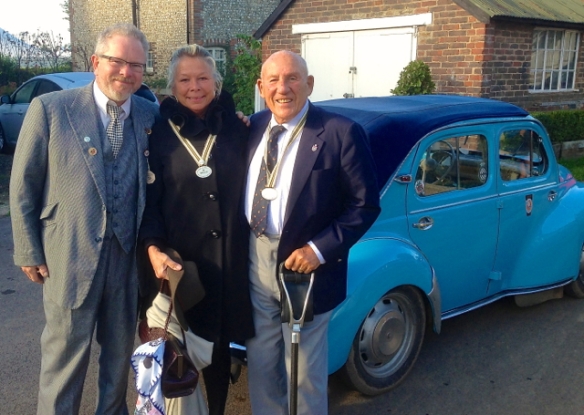 All in all we had another brilliant weekend, the ‘little’ cars performed really well and hopefully did their bit to support the event and they certainly brought a smile to the face of many Revival goers. Fingers crossed we get an invite back for next year.

Following on from our blog about the Telegraph shoot and our little mishap, we were pleased to see that the Telegraph had reprinted the Goodwood supplement including the Mario review and included it in copies of Saturdays paper at the Revival.

Of course being awful posers, Mario had to ‘tootle’ off to the Telegraph stand to show off and get another copy. The girls manning the stand were delighted to see him (but not enough to give us a free copy!).

Lots of people commented on the article and all agreed that it was very well written by Andrew English. The Revival coincided with the article going live on the web with some different pictures… you can see it here. In fact we turned up with some passengers at the Goodwood Hotel to be greeted by a ‘gaggle’ of modern Audi drivers applauding us, as they were reading the paper as we arrived. 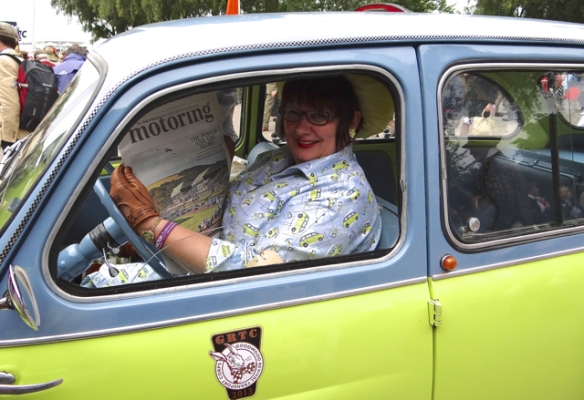 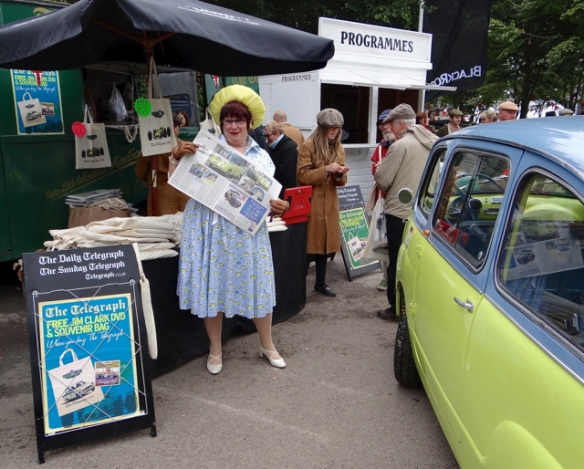 Finding it rather difficult to blog, not only have we been really busy but also the phone/wi-fi is almost impossible to get a signal.
Briefly it’s been a good day, not as wet as expected and lots of runs between the circuit and the hotel, kennels etc. We met lots of lovely people both old and new.
Regie the Renault was part of the Tour de France parade so we got to go out and do a lap of the track behind a peloton of vintage bicycles. 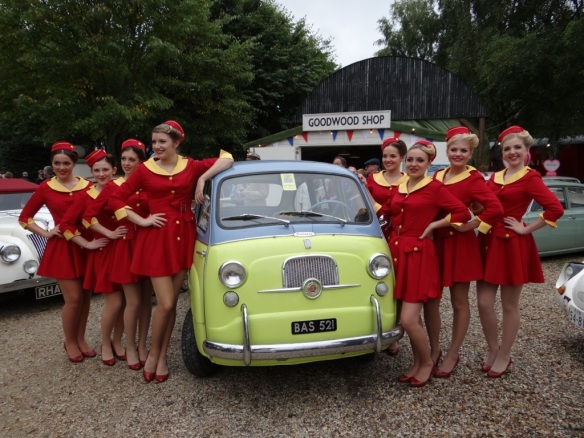 The racing went on into the dark this evening, and it started to rain… The end of a very long but fun day… Will try to blog more tomorrow.

Mario is back at Goodwood, all ready for 3 days of taxi driving at the Revival.

Loaded up with all his new matching luggage we had a lovely drive down, it was like driving a new car – the new drive shafts and brakes have made a massive difference and everything is really smooth now.
We arrived in time to see some of the cricket match. And be entertained by Hurrel and Lardy. 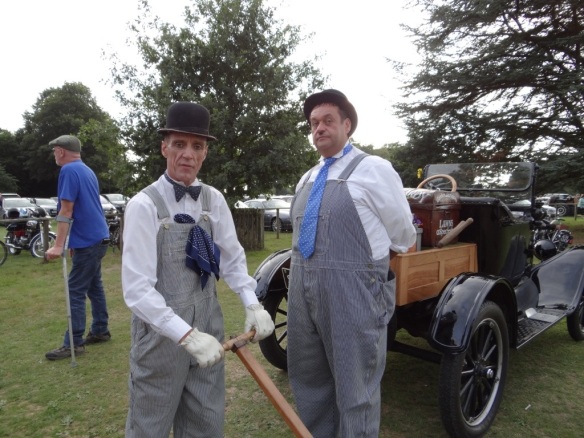 Our relaxing afternoon was soon interrupted when we asked to go and do some filming for ITV, more will be revealed as the weekend progresses! 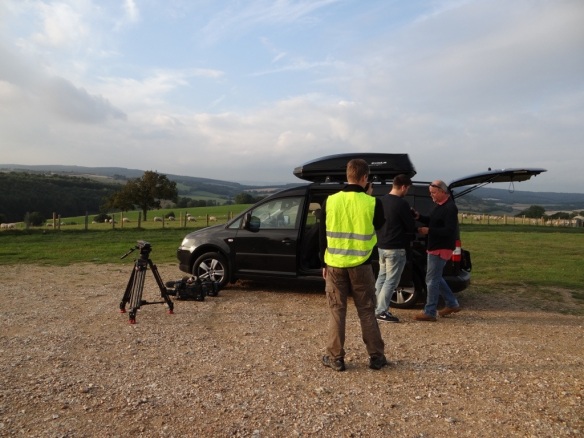