This weekend we will be at Goodwood as part of the Revival period taxi fleet. This year is the 20th anniversary of the Revival and there will be lots of celebrations happening and on Sunday Mario’s ‘brother’ Regie the Renault 4cv is going to be turning 60 so there is lots to look forward to.

While going through some old files the other day I came across a written report of Regie’s 40th birthday. We organised a special treasure hunt and a picnic at Goodwood with the permission of the estate. So to follow is that report and some pictures of the day. Mario  hadn’t even been thought of then but he’ll be there to enjoy the day this time. We’ll post about this years celebrations and the Revival after the weekend. 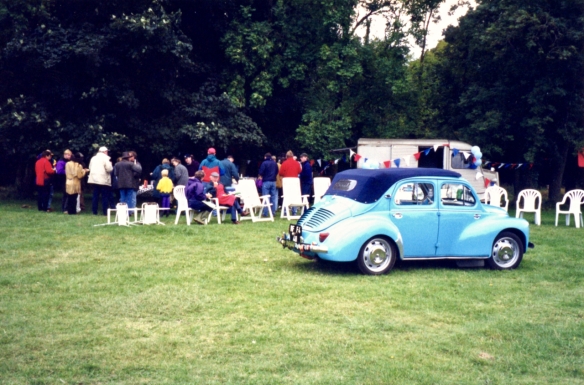 Regie’s special day out (Sept 1998)
September 9th 1998 was a very important day. Regie our Bugatti blue 4CV convertible, was going to be forty. It was decided that the occasion couldn’t go unmarked and so Regie would have to have a party.

The date was set for Sunday 13th September, giving us a weeks grace from our return from the South of France, to organise and sort out any health worries with Regie – considering his form on our Previous holiday this was quite possible! Invites were duly sent to all his 4-wheeled friends, with instruction letters for their ‘parents and guardians’. A good response was received but an unfortunate clash with the Paris to Marrakech Rally meant that several of his more athletic friends were otherwise engaged.

The 13th dawned, dry but very cold, this seemed rather good in respect of the previous weeks weather but rather a shock for recent holiday makers. Regie’s ‘Grandparents’ were dispatched with the ‘Grumpy Truck’ (our Citroen H-Van) to the picnic site at Goodwood (as previously agreed with the Earl of March), to set up as the catering unit – they could have made quite a profit selling teas to ramblers before we arrived! 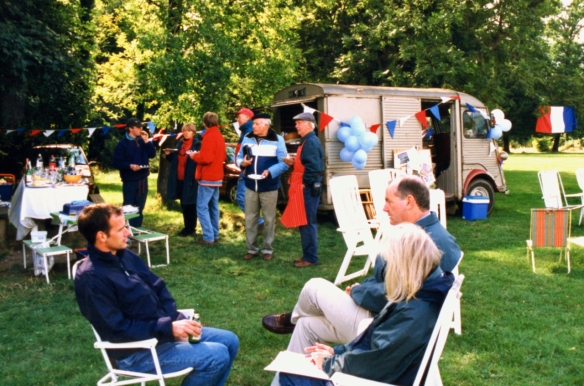 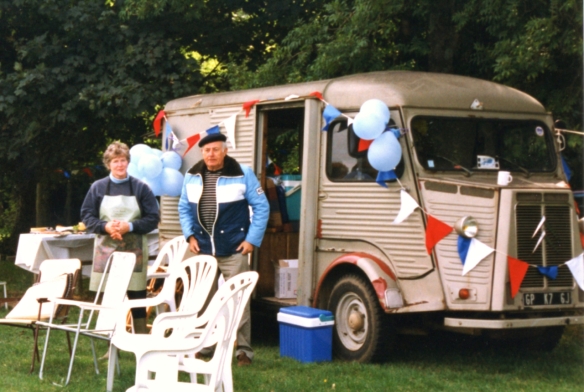 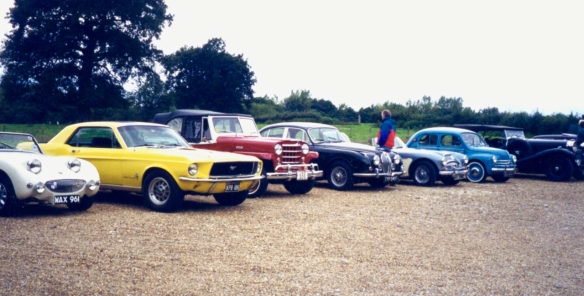 Meanwhile the party-goers, assembled in the car-park of the King’s Arms at Fernhurst, awaiting the arrival of the birthday boy… he turned up to cheers, dressed in a birthday banner and Bugatti blue balloons.

As VIP, Regie was first off, on the treasure hunt, with his ‘mum’ Jane at the wheel and her mate Karen as navigator. Although no route secrets had been divulged, It took place in our local area, which was probably a good thing, as driver and navigator had a lot of gossip to catch up on! The route devised by James, took about a hour, over very scenic country roads, winding through Northchappel, Kirdford, Wisborough Green, Petworth and Duncton, picking up numerical clues on the way. This included counting figures on pub signs, code numbers from fire hydrants and chimneys and the most controversial being the number of post boxes along one lane. Was it five or six? James has been back to check, however, I won’t reopen the argument by saying who was right! but they do say that the judges answer is final.

Luckily the rain held off and Regie managed to complete the run ‘topless’, although hats, gloves and flying jackets were essential for the crew – rather sad in early September. The ‘Grumpy Truck’ was in position under the trees, decked out in red white and blue bunting and more matching balloons. A feast had been prepared, displayedt on black and white chequer cloths and plates. A huge birthday cake (specially made by friend Carol McGovern) was centre stage, complete with a sugar crafted model of Regie on top.

Regie parked up in the middle with the other vehicles forming a semi circle around him as they arrived. The order of arrival however seemed rather different to the start, either due to the swopping around of the drivers and navigators or perhaps one or two unscheduled refreshment stops! – it was Sunday lunchtime after all. 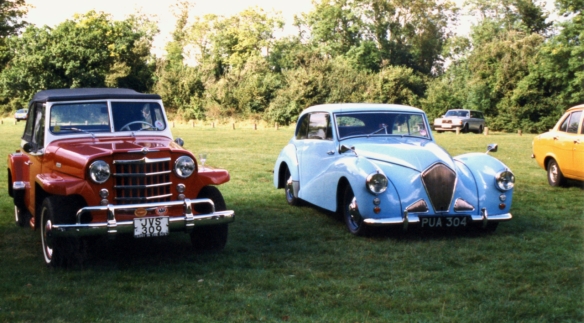 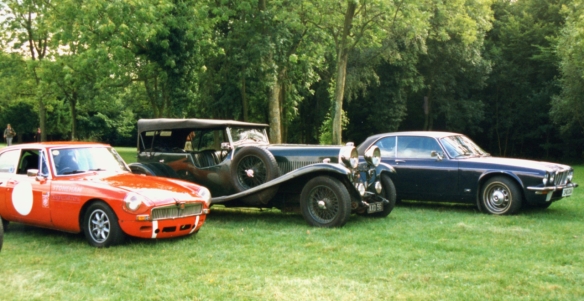 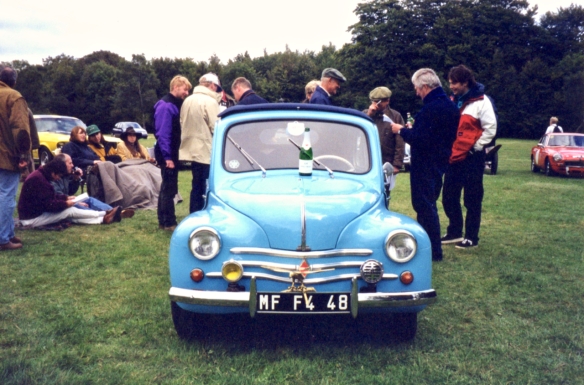 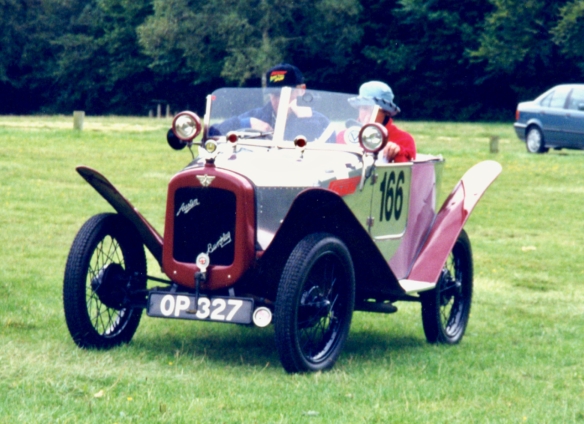 The Champers was cracked open – chosen during a rather excessive tasting session earlier in the year at Le Mans – and the French peasant style buffet tucked into – French bread, cheese and pates, courtesy of our holiday, fortified with lots of chicken and sausages. This was followed up with ‘Grannies’ home-made apple pie.

The champagne and conversation flowed while completing a small quiz, there was some cheating – you all know who you are! The answers were all connected to Regie, France or 1958, if only everybody had realised. Guests also enjoyed reading the board with all Regie’s letters, cards and e-mails from friends both present and absent, it’s amazing how articulate some of these cars are, Regie received messages from all corners of the UK, Germany and even a birthday note from Austrailia, this was from Hugh who we met at the Renault Centenary Weekend and who appears to be the ‘Regie Fan Club down under’! 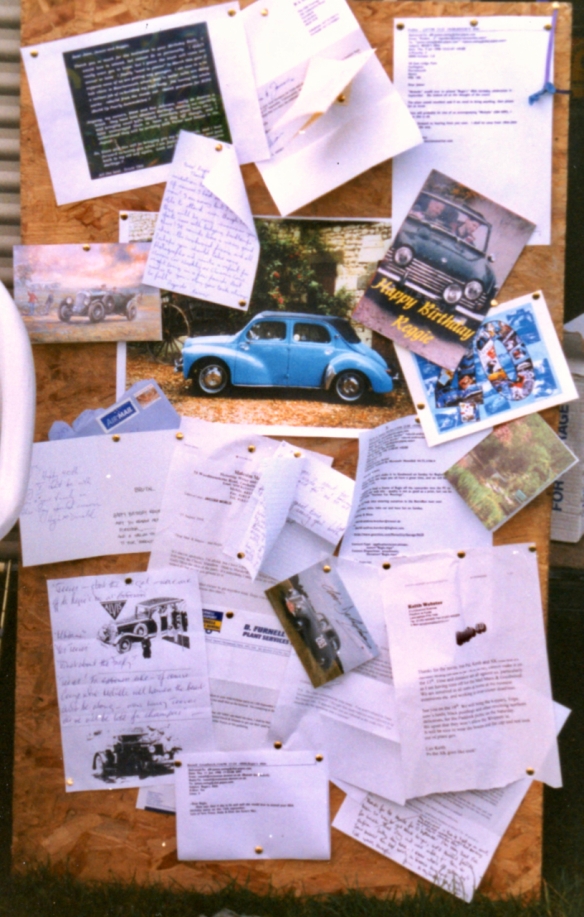 The afternoon wound up with a prize giving. The Treasure Hunt prize was awarded for the closest combination figure from the questions answered and a guess to the mileage recorded by James in the sweep vehicle. This was won by the Simca with Chris and Ailsa at the wheel. Two prizes were given for ‘furthest travelled’ – the Escort Mexico (Dave Jones) which had come from Oxfordshire and a rather sneaky award to ‘Burlington Bertie’, the boat-tailed Austin 7 Special and his guardians Dave and Mel – they all turned in a van after competing in the Brighton Speed Trials! The Mann’s Lagonda got the ‘most pubs visited on route’ prize, but they were busy very trying to think up an alternative reason to tell the family back home! 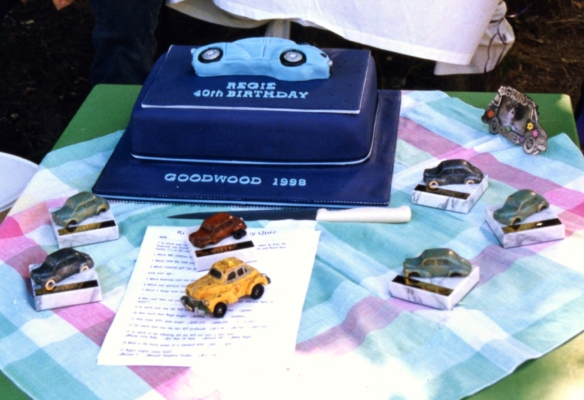 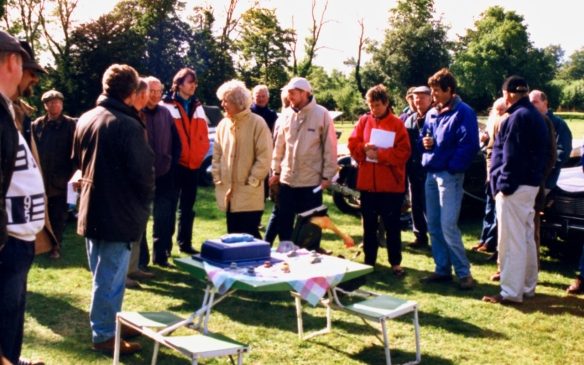 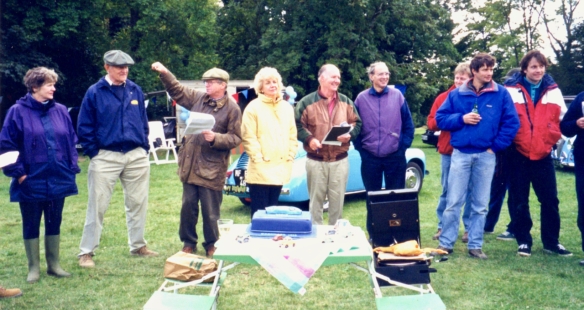 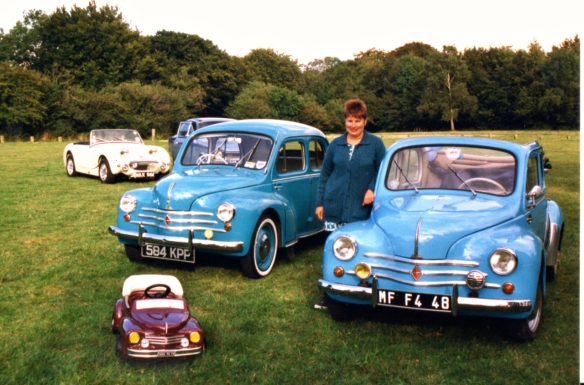 And finally the prize for the car Regie ‘most fancied’ had to be awarded to ‘Michelle’, James Polden’s 4CV and a very pretty sight they made posing together with James’ ‘baby’ pedal car.

Everybody began to make their way home, the cold finally beginning to bite, but we think that Regie and his friends had a jolly good time – roll on his 5Oth!