It’s been rather busy with domestic chores leading up to the big day to do much blogging but we have some great ideas for posts the New Year. Mario will hopefully be out and about on New Years Day at the VSCC meet at The Stag Inn, Balls Cross near Petworth, followed by lunch with some of his motoring friends so expect a report and pics soon after.

Thank you for following us on our motoring adventures, we’ve had a great and interesting year and plans are already in place for exciting things to do in 2015. We will be going to the 73rd Members Meeting at Goodwood in March, fingers crossed the weathers as good as last year. The Haslemere Classic Car Show which we organise is happening on the 24 May and hopefully will be bigger and better than ever – see the post on this year! We have sent in an entry for Wheels Day at Easter, which is going back to it’s old venue and will be pre-booked cars only after they were over run with vehicles in 2014. We already have a contract in place for the GRTC at the Revival, so Mario will be back as the ‘Worlds favourite little taxi’ but with a much better work schedule, so he will also have time to be part of the event as well as working. 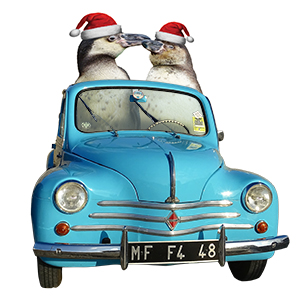 So for now, Mario and Regie wish all our readers and followers a very Merry Christmas and a Happy New Year xx

We’ve recently posted about Mario’s ‘brother’ Regie the 4cv Renault’s restoration and our trip to the 4cv 50th Anniversary so keeping on the theme… 1998 was Renault’s Centenary and of course Regie wanted to be a part of it.

The weekend was to be held in Paris based on the Île Seguin an island on the Seine at Boulogne-Billancourt which was the site of one of the most iconic Renault Factories which had ceased production in 1992 and has since been pulled down. Veteran, Vintage and Classic Renaults from all over Europe had been invited.

We left after work on Friday evening, planning to stay in Northern France so we could arrive in Paris early on Saturday morning. Driving towards the Tunnel we smelt burning but thought it was from other traffic, when we arrived at the tunnel and had a quick look in the engine bay we were horrified to see a burnt melted mass where the alternator had been. Not a major problem but it did mean we didn’t have any facility to charge the battery. Shutting the engine bay before anybody official saw the mess, we managed to get onto the train and find the hotel just outside Calais using sidelights. The Following morning, not needing to use lights etc we managed to get to Paris using the power in the battery and then purchased a new one to swap over. From memory somebody helped out and charged the first battery in their car for us!

We started off looking round the fantastic Renault Collection, which was housed in the old factory buildings. This included all sorts of development, concept, racing and historical Renaults. The first image shows a very special 4cv which competed in the Mediterranean rally in 1950 across Africa and the Racoon concept car from 1992 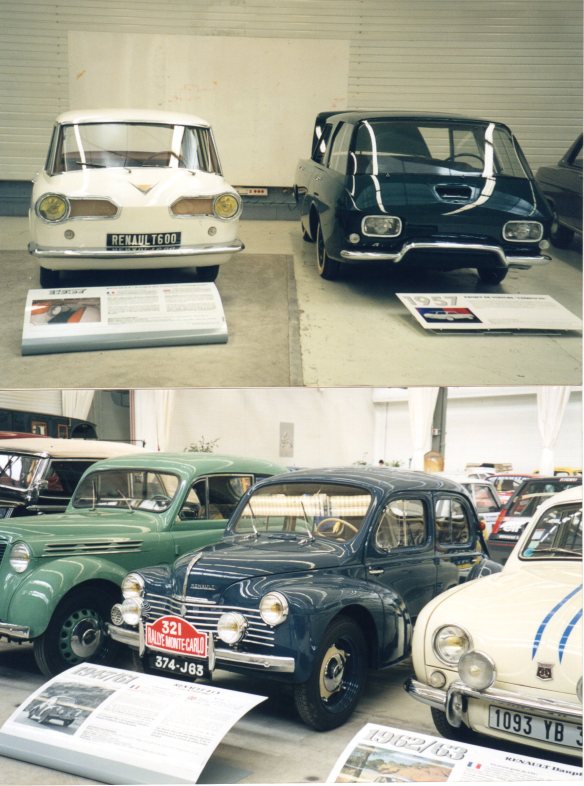 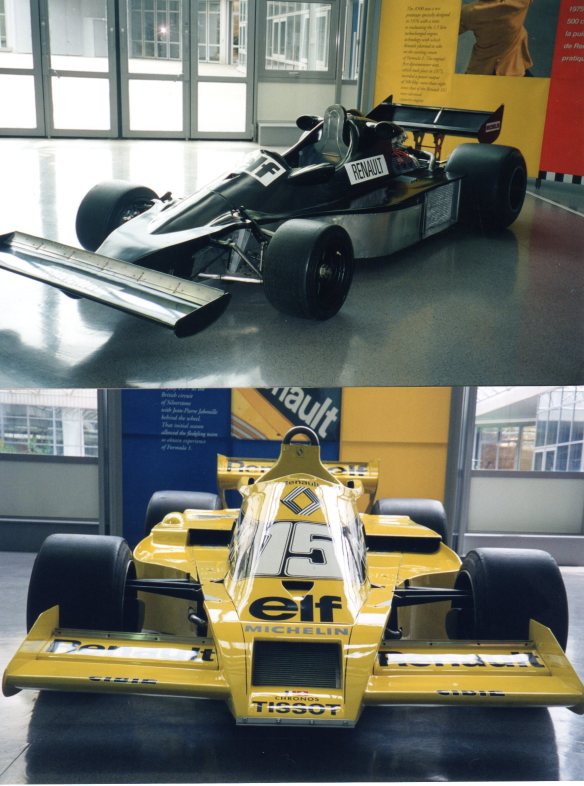 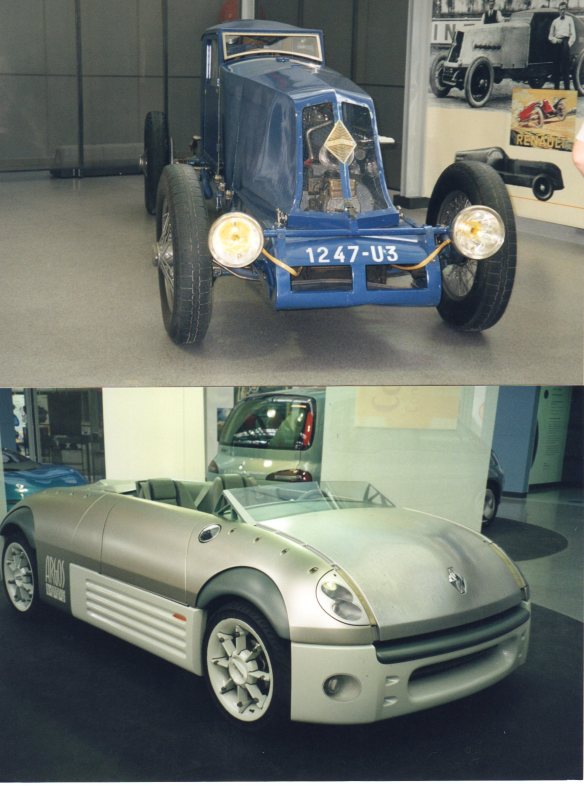 One of the most fun exhibits was a scaled up Twingo designed to give adults a childs view if being in a car! 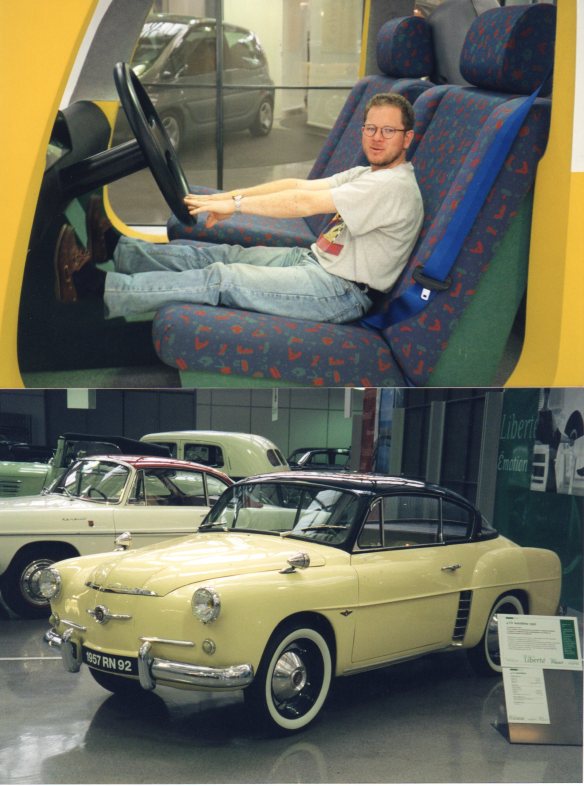 We got to pose for a centenary picture outside the old factory. 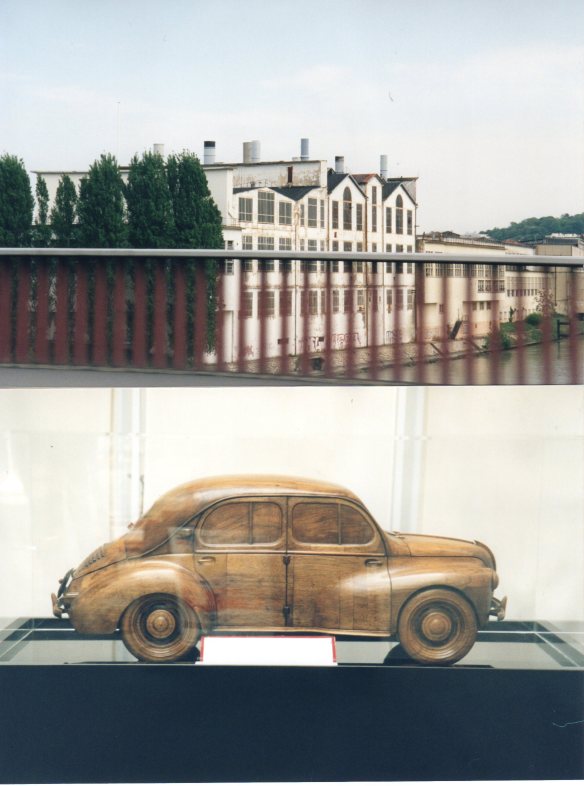 The next part of the weekend was the ‘Concours de Elegance’ competition. In true French style a pre-selected shortlist representing the 100 years of Renaults history ‘performed’ for the crowd and a judging panel. 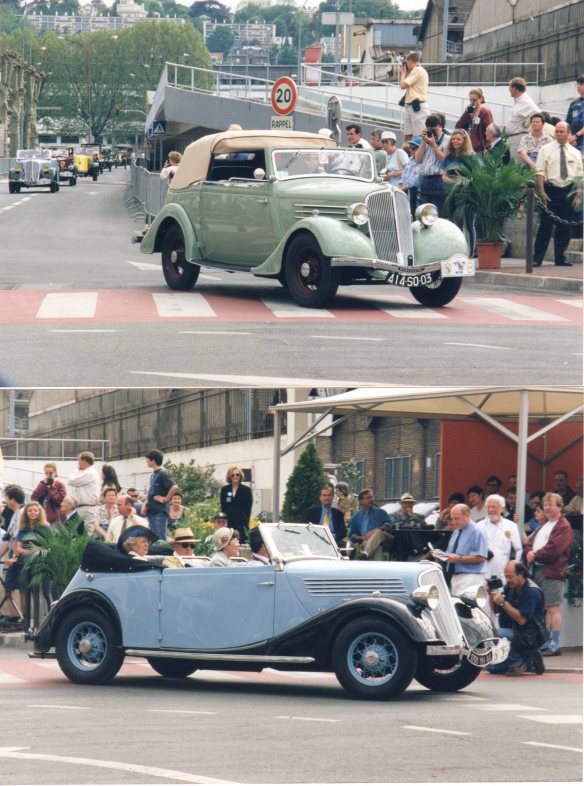 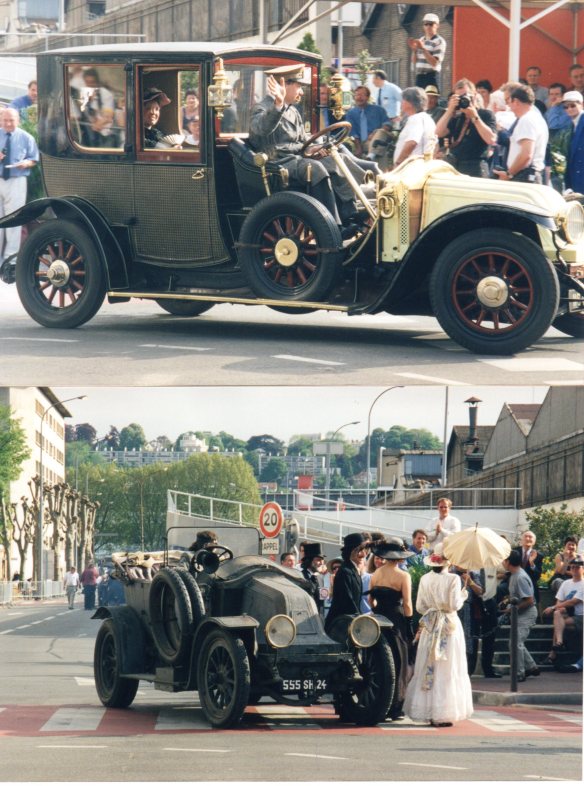 An early WW1 tank designed by Renault, outside of the original workshop. Renault collaborated with the German’s during the second world war which enabled him to continue designing which led to the launch of the 4cv ‘People’s car’ in 1946. An unusual special bodied 4cv in the hotel car park. 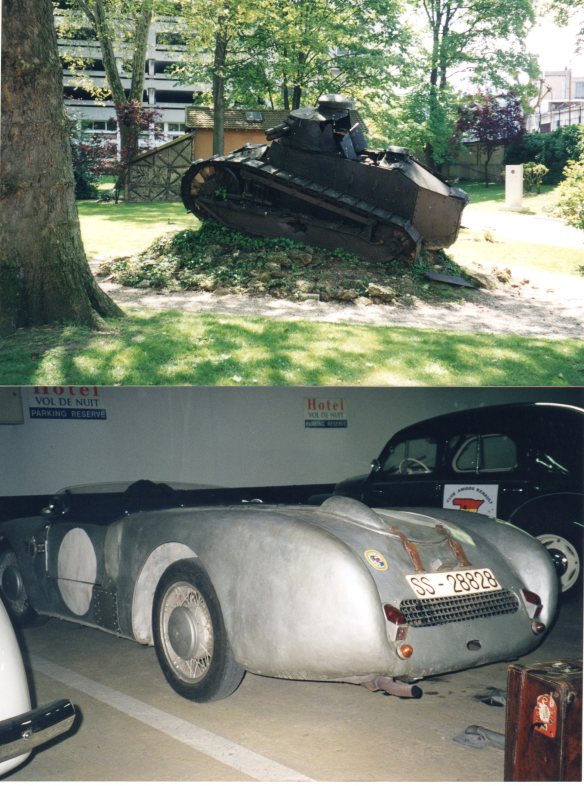 On the Saturday evening there was a vast dinner, maybe 2000 people, tables had flags on them so you could sit with people you understood! It was very noisy and there was quite a party mood. The following morning all the cars gathered again at the factory before setting off for the celebration parade.

We headed into Central Paris and parked up in a road approaching the Arc de Triomphe. Excitement was building with so many interesting cars and people. James took the precaution of changing the batteries over again as it would have been too embarrassing to have broken down.

We were waved off in batches to parade down the Avenue des Champs-Élysées and felt very important being cheered by the flag waving crowds. In typical French style there was very little organisation with classic cars going in all directions. After the main parade we crossed the river and proceeded past the Eiffel Tower and on to the Hippodrome de St Cloud, where we had the most fantastic buffet lunch complete with ice sculptures and in great company from around the world including Germany and Australia. 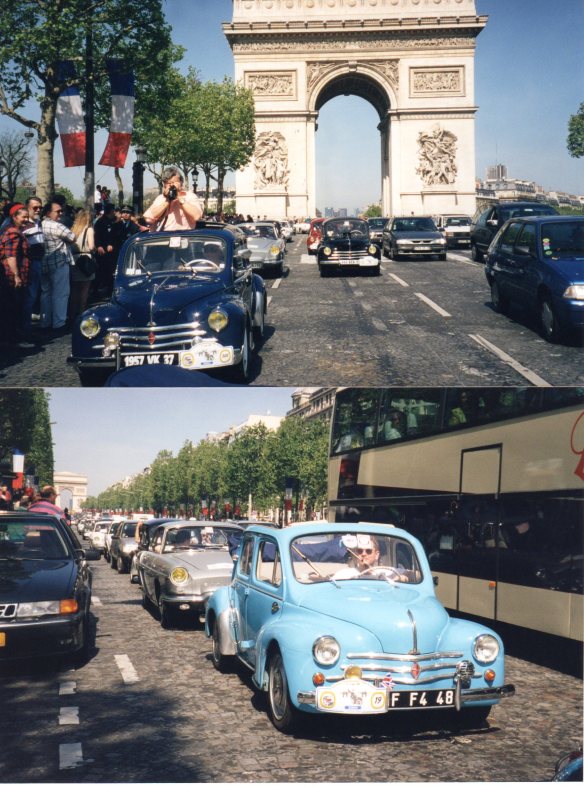 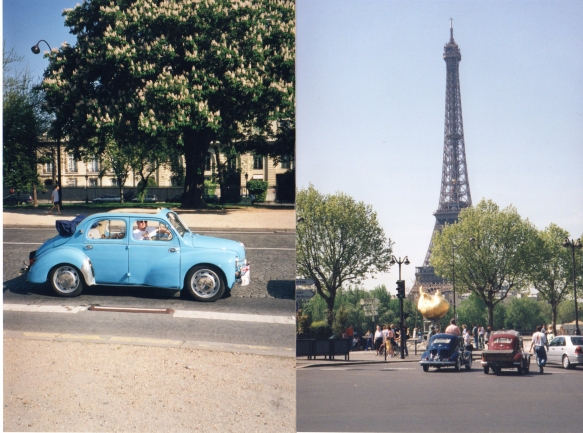 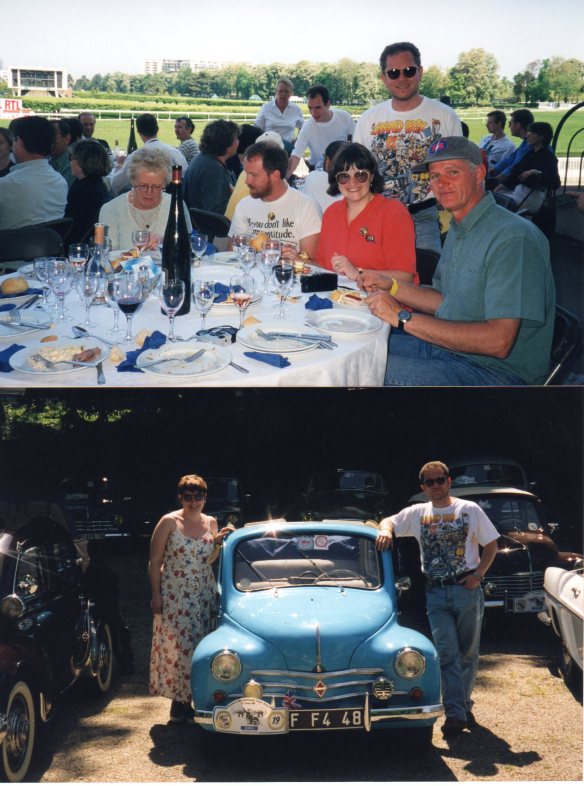 We left after lunch for the drive back to the UK, most of the route went without incident but  as we were on the M25 the light was starting to fade and we could only drive on sidelights. Luckily we were able to ‘shadow’ a lorry who realised we had a problem and he let us sit behind him most of the way back.

So apart from the regulator/battery issues it had been a wonderful weekend and it was great to be part of something with such historical significance.