Regular readers will know that we have been part of the GRTC (Goodwood Revival Transport Corps) for many years, in fact we have been driving at the Revival since 1999. As the event is supposed to be a complete ‘step back in time’ there are no post 1966 vehicles allowed within the circuit and so a large group of volunteers bring their pre-66 cars along and run a service to support the event. This year as usual I took Mario, James was in ‘Regie’ the Renault 4cv and our friend Craig with ‘Kato’ the Subaru 360 – it’s always fun to see people amazement at how much room there is in the ‘little’ cars. 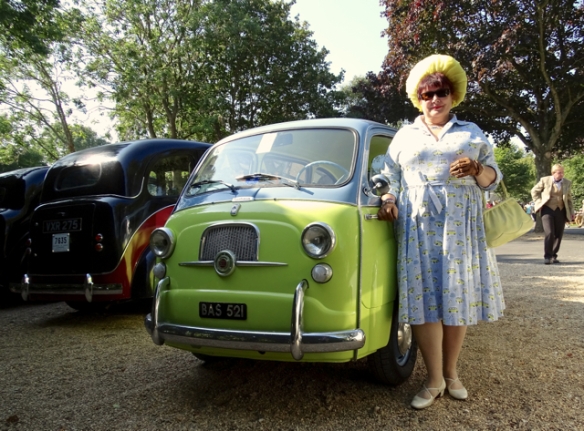 When we first started the event was much quieter and we were based on the infield but over the years as the event has grown and evolved and the GRTC with it. Several years ago we were moved from the infield to the outfield and a location alongside the Circuit shop in a staged set with the ‘Glam Cabs’ with us as ‘Speedee Cabs’ from the Carry on Cabby film from 1963. Of course the Glam Cabs just posed and entertained the crowd with their Ford Cortina’s while we did all the work! 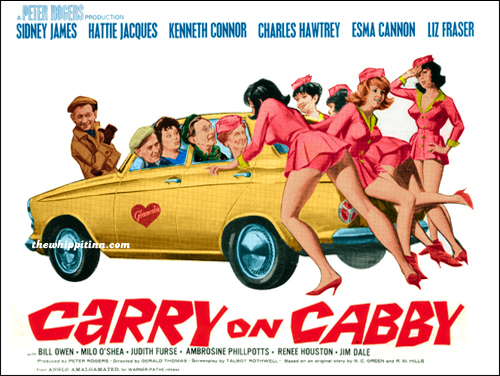 This was pretty successful and carried on for a number of years but we knew that recently with the huge crowds, good old Health & Safety weren’t happy about working vehicles mixing with the public and with more people needing to be transported, that things were going to change…

This year we were moved to a new ‘taxi rank’ the other side of the main public entrance with our own gate so we didn’t have to drive through the crowds. Using a large tarmac area with a tree in the middle that acted as a roundabout to keep the traffic flowing. We were still just about within the circuit but barriers were erected so the public couldn’t get in to see the cars close up which was a shame, as talking to interested people about Mario, Regie and Kato was always one of the fun things about the event and is what led to this blog and Mario’s Facebook page, as so many people became fans. 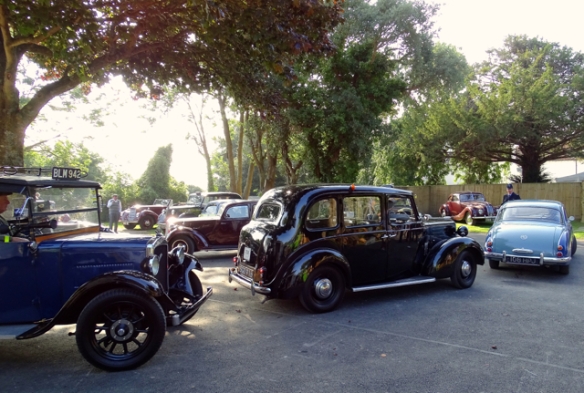 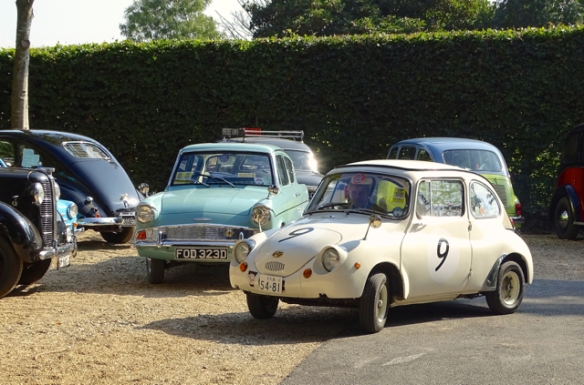 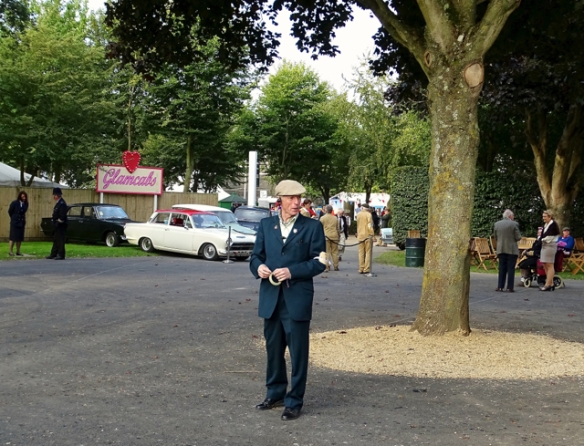 Goodwood had done a top job in ‘dressing’ the area with a great ‘Speedee’ cabs office and waiting room, a bus and the Glam Cabs just outside, with all the cars parked round the edge of the rank it made quite an impressive sight. The Glam Cab Girls, part of the Goodwood Actors Guild or GAG, did a brilliant job all weekend entertaining the passengers as they arrived and trying to poach Mario and me for their ‘business’. In the early years most of our ‘rides’ had been within the circuit, especially for me taking the press out around the perimeter road but this has also changed, we now go out of the circuit and run between the House, Hotel, Kennels and Lavant, sometimes with drivers and ViP’s but more often taking people to lunch at the Hotel and Kennels, a bit of a shame as we now feel less involved with the event. 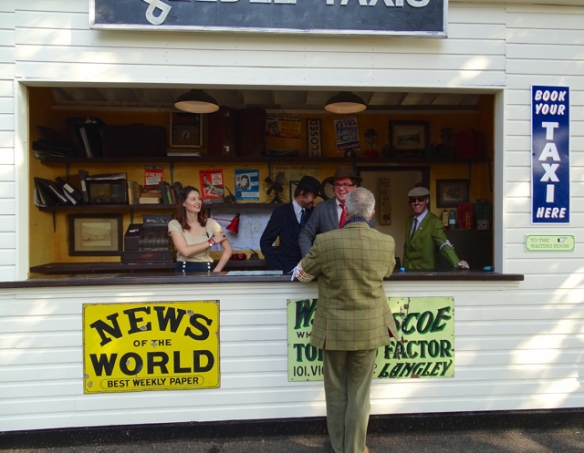 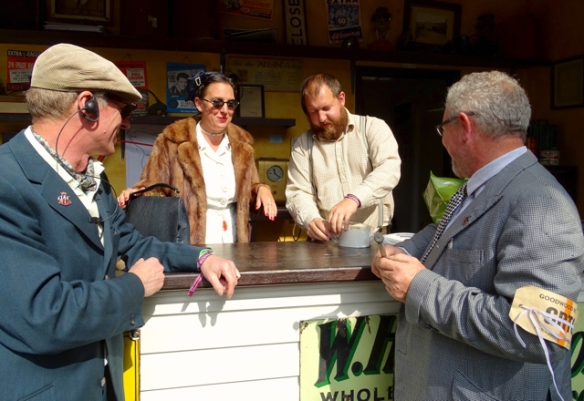 The number of taxi’s has swelled a lot this year with a collection of Jowett drivers, traditional London cabs plus a selection of other vintage and classic vehicles as well as the Jeeps based outside the circuit who mainly carrying mechanics and equipment. However there still seemed to be more to do and Mario completed over 300km/200miles an increase of 50% on last year which was already a record run. The new setup worked very smoothly but the downside was that the cars never had a chance to stop and hence cool down between runs, as once you were on the ’roundabout’ you needed to keep moving.

Unfortunately for the first time in 16 years both Mario and Regie came home poorly in fact poor Mario nearly didn’t make it home at all and was running really badly, having got very hot. Unfortunately Mario doesn’t have a temperature gauge, only a light and although that didn’t come on, if it does, it is really too late. James and a GRTC friend Fabian spent a couple of hours on Sunday afternoon taking him apart and looking for the problem without much success, he just couldn’t cope with the extended running and James will have to do some further investigation to get to the route of the problem. Regie had a problem with the radiator, the top is soldered on and as the radiator in the 4cv is attached to the axle, as the car entered and left the rank the suspension articulated over the kerb and split the radiator, as this was on Sunday afternoon there wasn’t much we could do, so Regie had to retire from service after also getting extremely hot.

Obviously this was the first year with the new setup and there were some teething problems, we have had a good debrief with Goodwood since we came home and I’m sure things will be sorted and improved before next years event.

Although we didn’t get to meet so many members of the public, we did give rides to some very interesting people who were in turn very interested in the cars and how we had got involved with the GRTC. Mario was a bit low on celebrities this year and we didn’t see many of our ‘regulars’ (several of them weren’t there) but we did see Max Chilton the current F1 driver and his touring car driver brother Tom, they nearly had a ride in Mario but choose to ‘pose’ in a convertible! We gave Darren Turner (former McLaren test driver and current Aston Martin driver in the FIA World Endurance Championship) a ride, Barrie ‘Whizzo’ Williams and several other owner drivers. 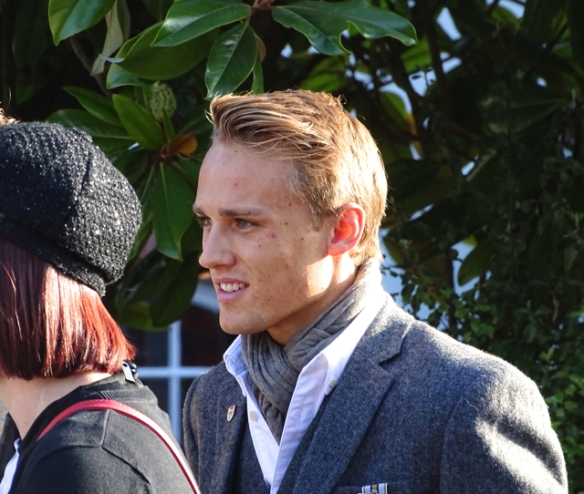 Lots of passengers appreciate being able to travel in unique vehicles, in fact one gentleman said he’d be happy to spend the afternoon driving back and forth to the hotel in various cars! Mario also had some lovely comments from his passengers on his website, one saying that the ride was the ‘highlight of the weekend’ and of course we got to see lots of friends from previous years. 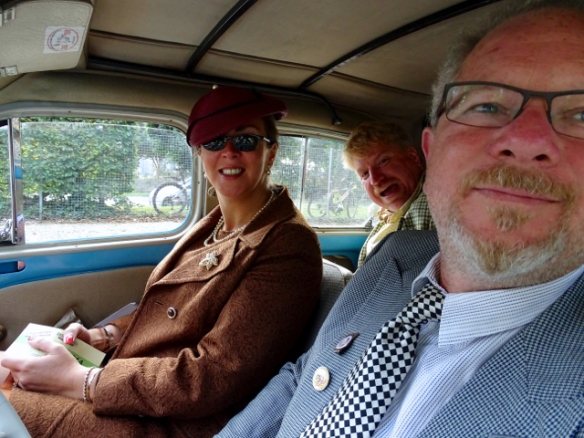 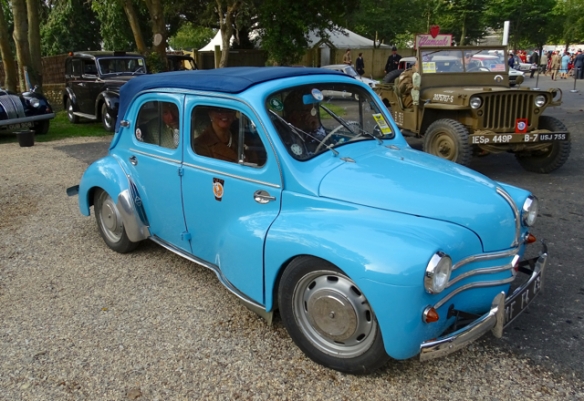 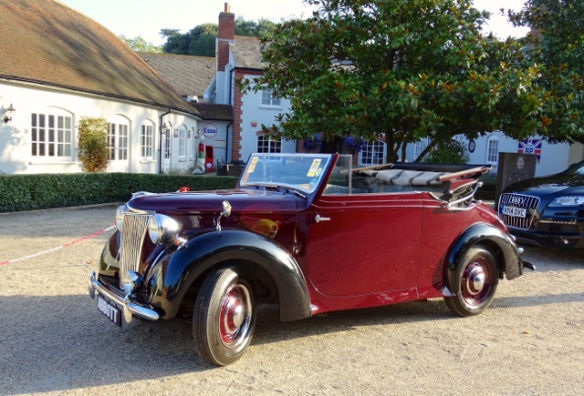 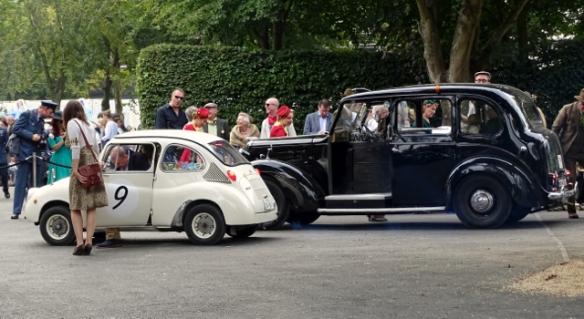 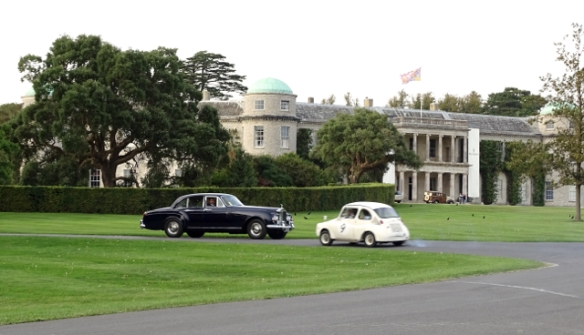 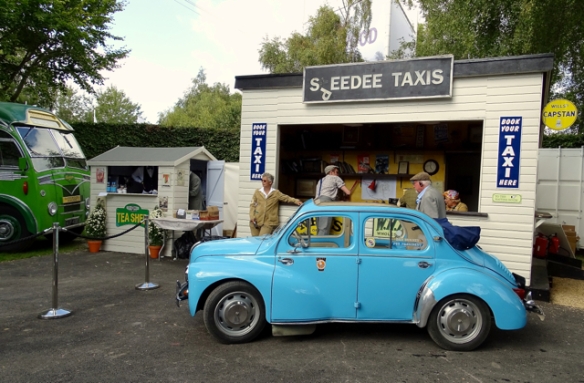 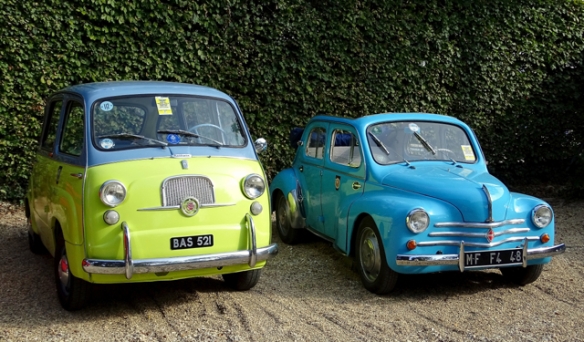 Although we were so busy we had a great weekend, in our next blogs we’ll show you some of the things we saw when we managed to get a bit of time off, plus the creation of the 2014 ‘Mario’ frock.

For a number of reasons we haven’t had a ‘proper’ holiday for a while and so we decided (rather last minute) to relive our childhoods and have a week in Looe in South East Cornwall where we had both spent fun holidays in the distant past. Of course, classic holidays require Classic transport and so set off at the end of August in ‘Regie’ the 1958 Renault 4cv convertible.

Regie is pretty good at holidays and previously we have taken him all over Europe, for a small car he’s pretty spacious and with only two of us there is the back seat as well as under the bonnet so carrying luggage isn’t an issue. The car has been upgraded to a Dauphine Gordini engine and ‘box giving us 4 forward gears and 850cc (50hp at the wheels) in a very light vehicle so we can cruise at a sensible speed and keep up with modern traffic. Of course the important thing for holidays is that Regie is a ‘decoverable’ as the French would say – it has side windows but the whole roof is soft top and folds right back giving all the benefits of a convertible but also a lot of protection from the wind. You also get a good view.

It’s around 210 miles from our home in Surrey to Looe and we set off on a Saturday lunchtime and took the more ‘country’ A30 route – Winchester, Salisbury, Shaftsbury, Sherbourne, Crewkerne, Exeter and then the A38 via Plymouth to Looe. With a couple of stops and a good run we arrived by teatime.

We had booked an apartment high on the cliff at Hannofore point which had a fantastic view but the choice of location was down to the property having parking, Regie ended up with an even better lookout with the parking space being 57 steps up behind the property.

Regie behaved perfectly all week, going up and down the steep winding Cornish Hills and his small size made him perfect for the tiny high banked lanes and the even smaller roads through Cornish towns and villages. We attracted attention wherever we went with lots of scratching of heads and questioning ‘what is it’. Being small and cute we could park in places others couldn’t and Regie was left in prime spots on the Quay on several occasions. 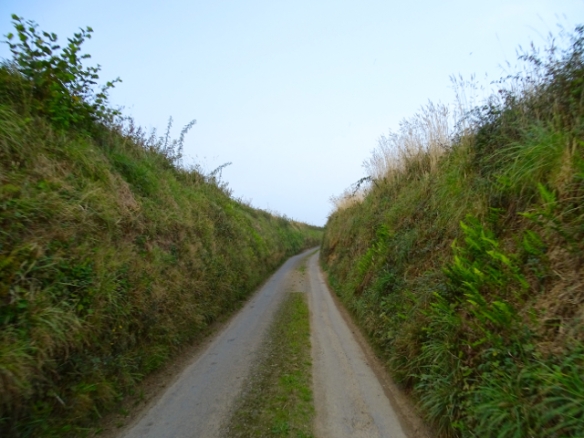 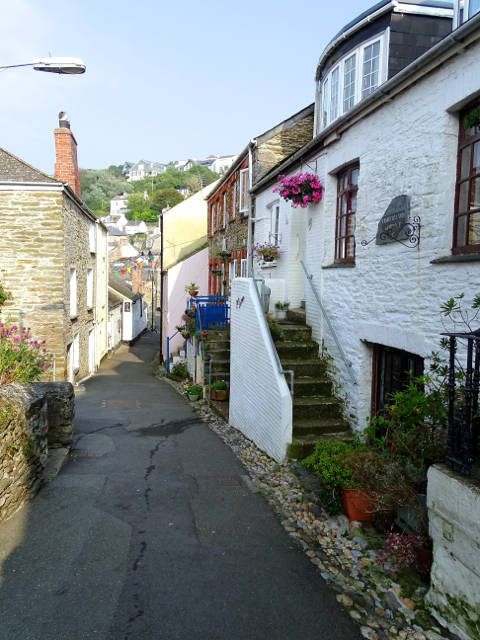 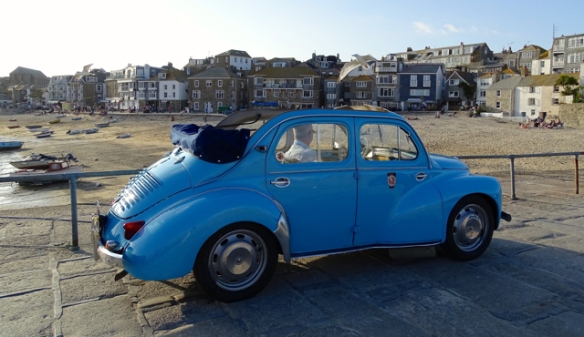 We went on adventures everyday and visited loads of places – Polperro, Fowey, Padstow, St Michaels Mount, St Ives, Plymouth often travelling across country on the the very tiny rural roads, you get a chance to see unusual things and the time difference isn’t that different from the main route. We came across this really low bridge…

Went for a ride on a steam train, which scarily was rather like the carriages we used to commute to London in…

We only had one damp day but did go up onto Dartmoor (to see the Prison Museum) where it was rather murky, it was the only time we had the roof up all week. 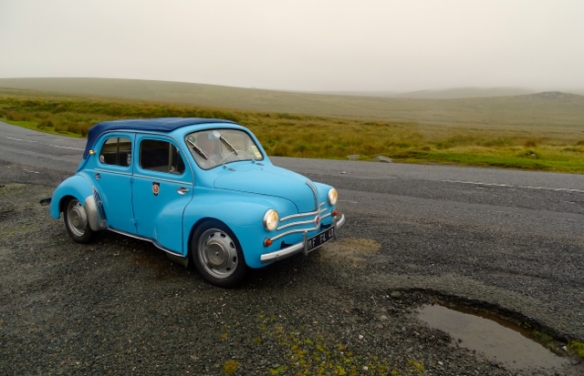 Went on the ferry across to Fowey, which had a much better view than the Torpoint Ferry to Plymouth where we were very hemmed in by large vehicles… 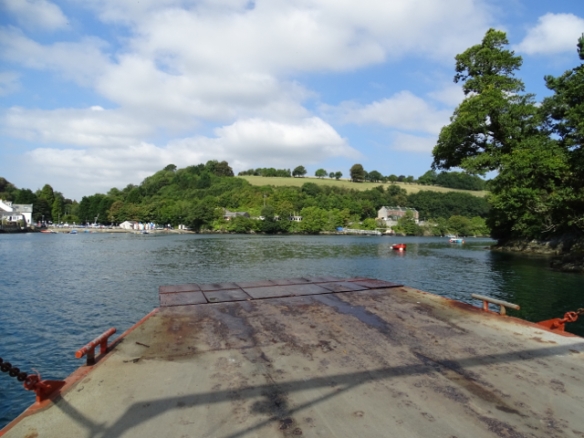 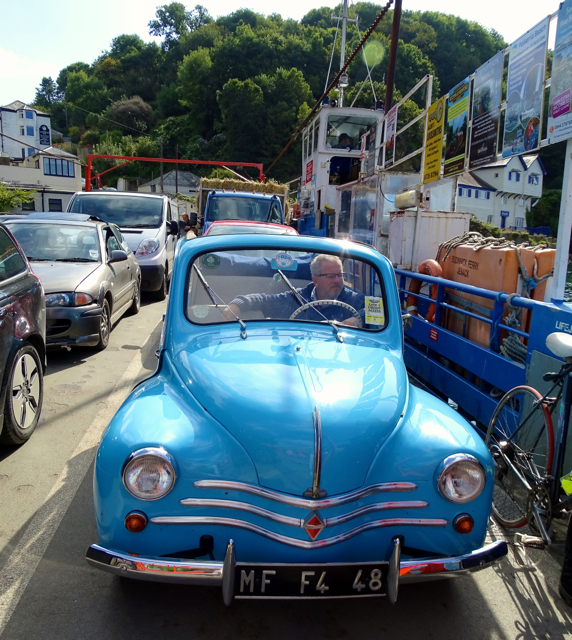 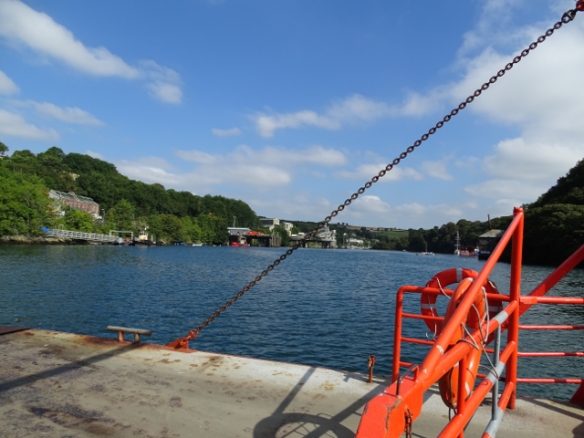 Over to St Michaels Mount, Regie was left on dry land and we walked over the causeway at low tide, we saw this great amphibious vehicle but you certainly wouldn’t want to buy a second hand vehicle which had been used on the island, we saw a 5 year old land rover which was really rusty! 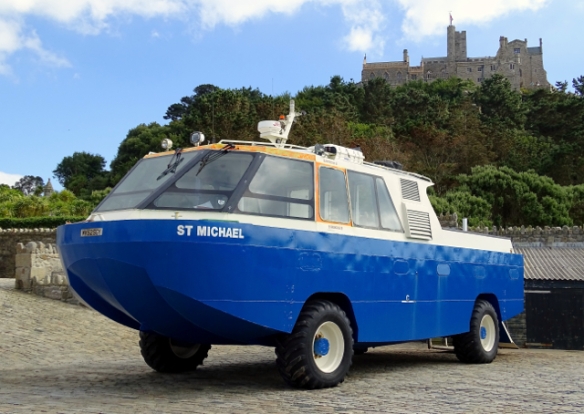 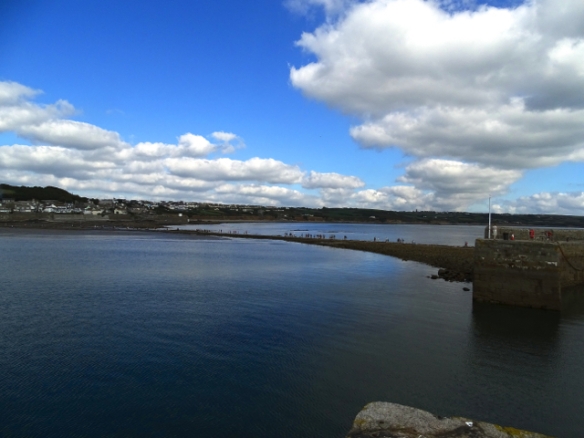 We had a fantastic week which proves it’s not always a bad thing to go back to somewhere you have good childhood memories off. The great weather certainly helped and going just after the summer rush meant that places were relatively quiet. Unfortunately we didn’t see very many classic cars and there doesn’t seem to be any sort of motor museum in Cornwall. We came back along the A303 past Stonehenge which is a much faster road although it can get very busy and Regie just purred along happily, he really is a perfect holiday car.

So we got back safe and sound and although sad to leave our glorious view and end our holiday we have the Goodwood Revival to look forward to this coming weekend where Regie and Mario will be in their normal role as part of the period taxi fleet driving ViP’s and drivers around the estate. We will hopefully be blogging as we go, so keep checking back. Now I must dash and finish off this years special ‘Mario’ dress, here’s a sneak peak at the material… 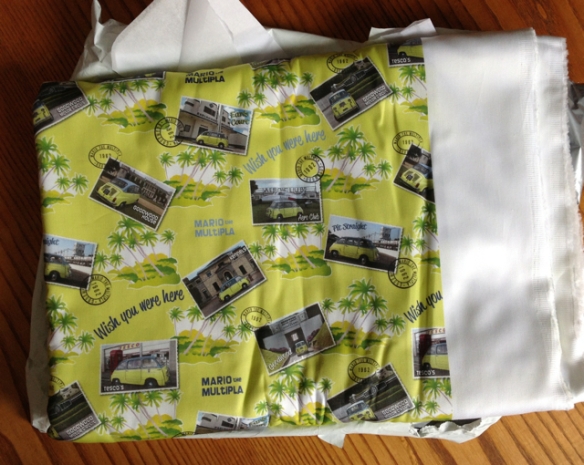