Over the years we’ve been lucky enough to see some very unique and special cars, either in museums or at the Goodwood Events. One of the vehicles to hold our attention the most, that has been displayed twice at the Festival of Speed in the Cartier Style et Luxe, originally in 2006 and then in 2012 for the 20th anniversary, was the absolutely fabulous 1938 Phantom Corsair. 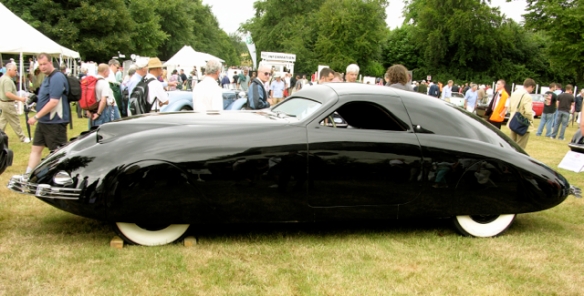 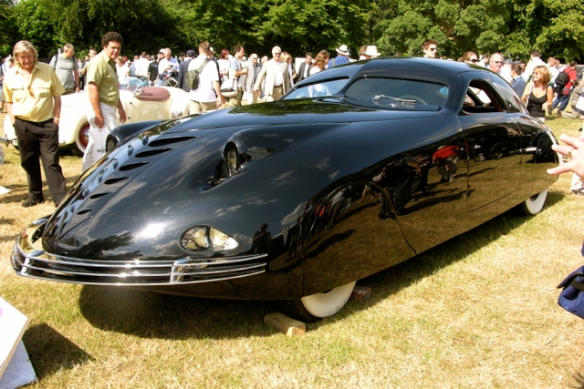 Designed by Rust Heinz, Grandson of HJ Heinz, founder of the ’57 varieties’ food empire and Maurice Schwartz from the Bohman and Schwartz coach building company of Pasadena. The car was totally futuristic but had many features which were later taken up by the major manufacturers, although the Phantom never went beyond the concept car stage and remained a one-off prototype. When not being seen at car shows around the world the Phantom is kept in the Harrah Collection now the National Automobile Museum in Reno, Nadava.

Rust Heinz had got involved with designing and racing speedboats while studying Naval Architecture at University, but he dropped out with plans to build his dream car. Bank-rolled by a wealthy Aunt, after the disapproval of his project by the family, he designed the body with a series of clay models and it is even rumoured that he did some wind tunnel testing. The result was a steel and aluminium body only 1.4m tall but 6m long giving it an aerodynamic shape that had fully skirted wheels, flush wings and no door handles. It was built on a Cord 810 chassis with a 4.7 litre Lycoming engine, one of the most advanced available at the time, with front wheel drive, an automatic gearbox and independent suspension. The prototype was capable of a top speed of 115mph.

The Phantom was a six seater vehicle, with 4 people in the front, one to the drivers left and two behind with large drinks cabinets taking up most of the rear space!  The flush electric push button door operation was very futuristic and the dozen or so instruments on the dashboard included a compass and altimeter. The design also included a radio and air-conditioning.

Heinz tried hard to promote the car, producing a glossy brochure and using his Hollywood and Media contacts. With no orders coming in the car appeared in a 1938 film ‘Young at Heart’ starring Douglas Fairbanks Jr, it was rather inelegantly renamed the ‘Flying Wombat’ and the film used a series of mirrors so the one car was made to look like a showroom full of them. 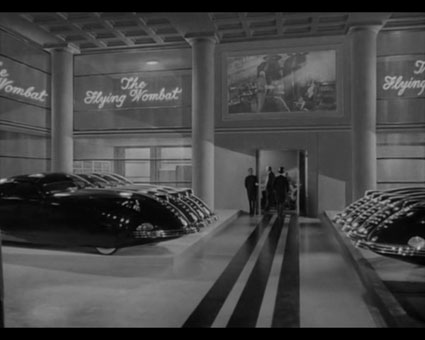 In July 1939 Heinz died after a car crash and his plans to put the Phantom Corsair into small-scale production at a cost of $14,700 each – three times that of a Cadillac – died with him. The family allowed it to be displayed at the 1939 New York World’s Fair as planned, in their sons honour.

The Heinz family suffered many tragedies and it has been said that the car was cursed. I do happen to know that on one occasion when it appeared at Goodwood it was said to have mysteriously moved on it’s own over night!

The car went on to have many owners over the years and in 1951 it ended up with comedian and early TV game show host Herb Shriner, who had the car customised partly to try and solve overheating problems. Strangely, he too ended up dying in a car crash. It was then owned by Nevada casino owner Bill Harrah who restored the car to it’s original conditions and put it in his car collection in Reno.

So there we have it a fabulous car with an intriguing story. It’s popularity is worldwide and for a one-off prototype, models are available and it has turned up in racing computer games and as Hot-Wheels toys. It’s certainly in list of favourite cars we’ve seen.

You may have read in previous posts that Mario has a new girlfriend… Cynthia; a retro styled bicycle. We got interested in the idea of a ‘vintage’ bike when James did the Tweed Run earlier in the year. So James found me a bike on Ebay, the right style and most importantly with a basket! 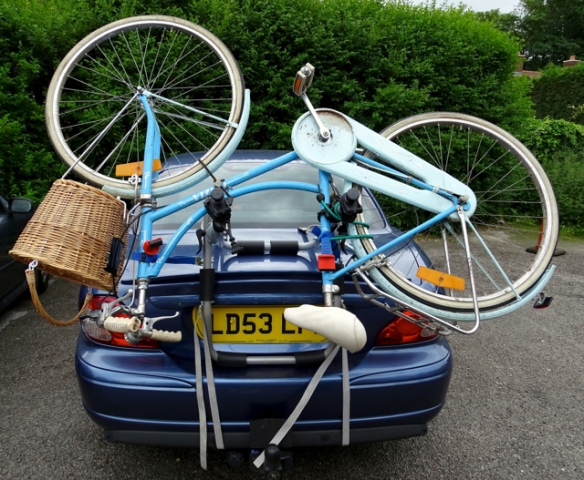 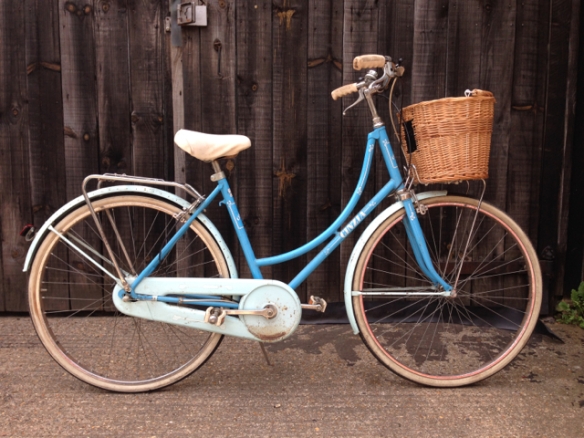 She was collected rather inelegantly, returning from Swindon, upside-down on the back of the car. Although it looked pretty good in the photo’s it was a bit tatty around the edges and so a restoration to match Mario was plotted. There was a fair bit of discussion as to how she would look which I blogged about earlier.

We put some pictures on Mario’s FaceBook and our personal pages and got our friends to vote on the combination they preferred! James set to taking Cynthia apart and got on with preparing, priming and spraying the frame and other metal parts, using the paint we had left from restoring Mario many years ago – proving that two-pack paint keeps perfectly well. He also striped down the gearbox, cleaned it all and reassembled it which will hopefully solve the problems with the gears slipping and polished all the alloy frame components to a mirror finish.

In the meantime I set to work at home in the kitchen sink with bleach and brillo-pads and cleaned the wheels and tyres, handlebars, saddle etc. The handlebars went in the dishwasher which brought them up really well, they were then lacquered to seal them. I managed to get rid of all the little rust marks and although the chrome is still a little pitted it looks pretty good. 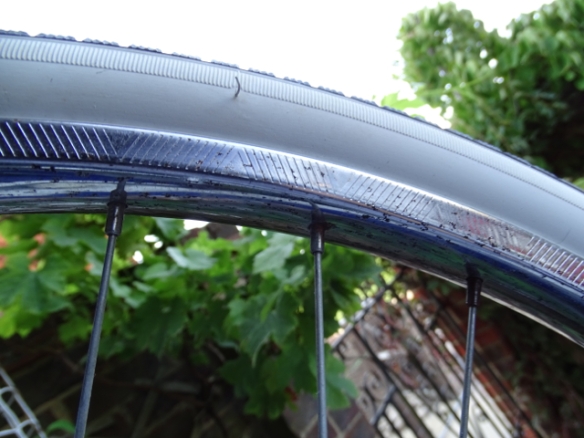 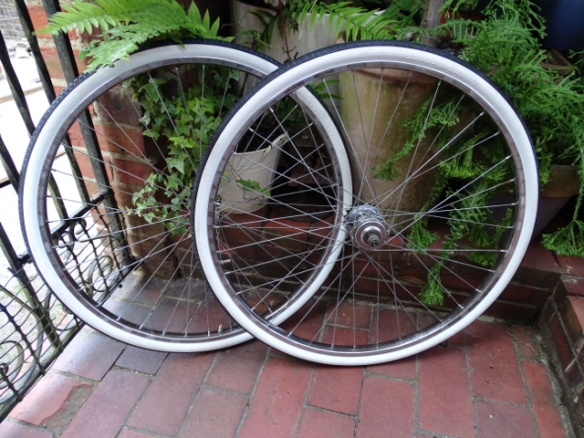 She was soon being put back together with the addition of some rather nice checker tape to match Mario’s bling. We had contacted Cicli Cinzia the original manufacturer to try and get some decals, they didn’t have any of the originals but very kindly sent us some from their current range of bikes, as the logo is quite retro looking which looked perfect and finished off the frame. It’s nice that you can still see the manufacturer especially as they are Italian. They also confirmed that Cynthia was originally manufactured in the 80’s (1986, marked on the gears) which is good news as Cynthia will be eligible for some of the vintage events. James also lightly sprayed the baskets blue which we rubbed back to give a distressed look and added some flowers round the front basket to complete the vintage feel. We also managed to get a perfect black and white elastic skirt guard which fitted perfectly in the holes on the mudguard. 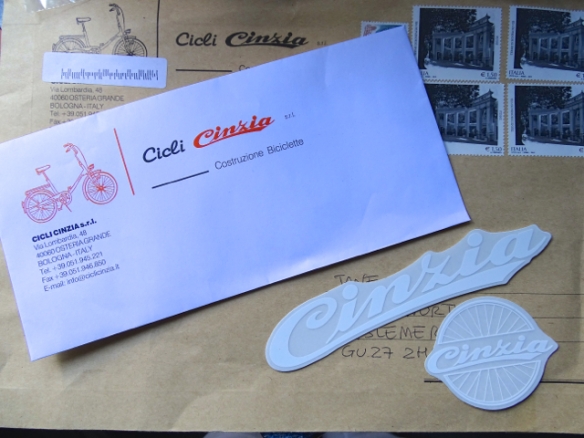 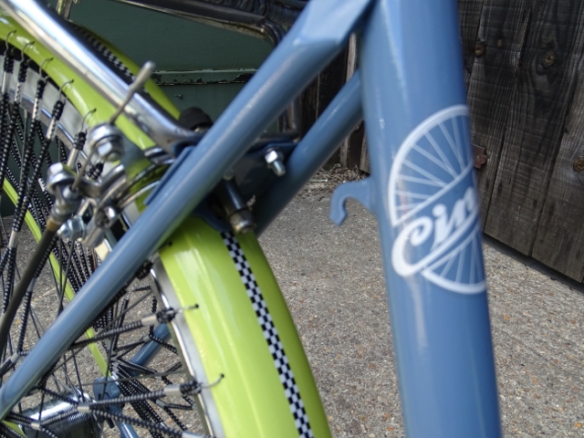 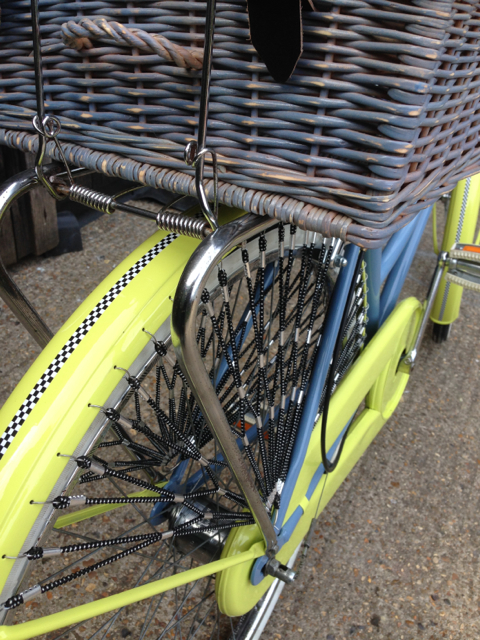 Now everybody knows that many of the top automotive launches take place at Goodwood and so the GRRC Open Day seemed a perfect venue for Cynthia to make her debut. The first thing was to see if we could fit the bike inside Mario. With all the seats folded flat into the floor the Multipla has a huge load area comparable to it’s size and Cynthia just fitted. With some fiddling and strategic positioning of bungee straps she was very secure and we had a easy journey to Goodwood House. The previous posting tells of our day out at the Open Day but I’ll just say here that Cynthia went down a storm and made a beautiful pair with Mario, she even had her own little sign! 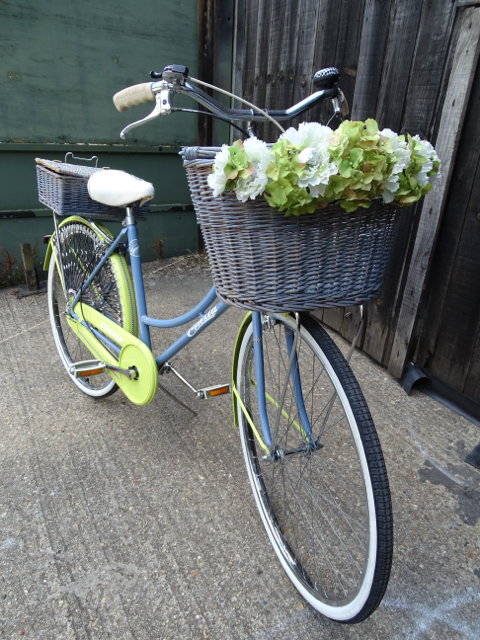 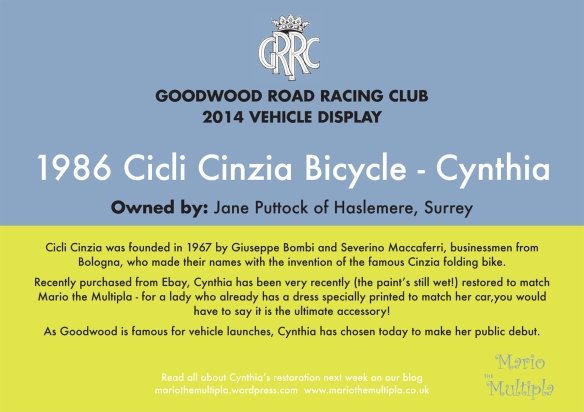 We are delighted with the result and are looking forward to more seaside cycling and hopefully taking part in a few vintage cycling events in the future. Mario is just pleased to have a new friend.

Last Sunday was a busy weekend for Mario. After a fairly early start (for us) we went to Breakfast Club at the Goodwood Motor Circuit, the theme was Throughbred Sunday, celebrating the cars of the Golden Days of the Circuit; 1948-66. We had a circuit pass and so entered at Lavant and drove round the track (a little too fast for the Marshall’s liking) before being parked up at the Chicane. We immediately had a crowd around asking questions about Mario and ‘Cynthia’ the newly restored bicycle which was strapped down in the back.

As the theme was a tighter brief there weren’t as many cars as there has been for say Convertible Sunday but they were all of high quality and at least it didn’t look like the supermarket car park. It’s one of the themes we most enjoy as we much prefer the classics. It was a lovely morning and we had a quick look up the grid and through the paddocks, bumping in to several friends along the way.

We’ve known this fantastic and very unusual Simca Aronde and it’s owner Julie for many years as we first met them at a French Car day when we first had ‘Regie’ the Renault 4cv. 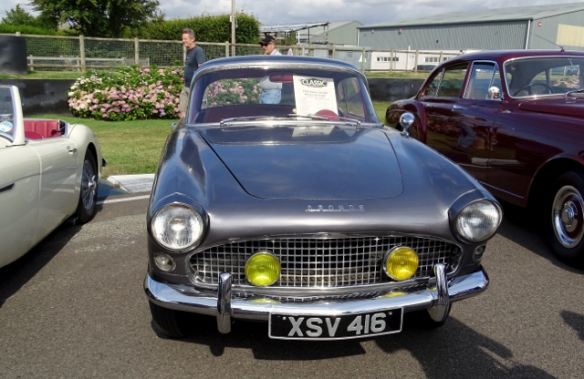 The Gordon Keeble is unusual but there were two of them on Sunday. 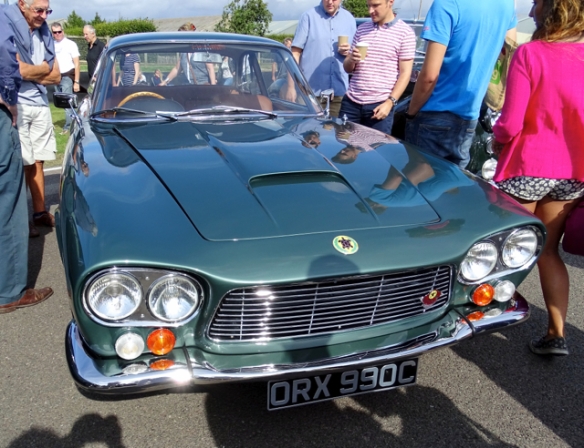 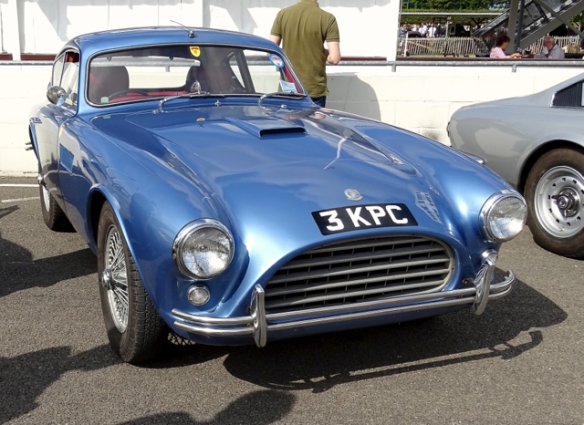 The favourite of the day and the car I’d most liked to have taken home was the Humber ‘Woody’ a stunning beast, one of only 4 made and used by a Scottish distillery as guest transport, it would make a superb picnic car.

We didn’t have long a the circuit as Sunday was also the GRRC Open Day at Goodwood House and Mario had been selected to be exhibited around the carriage circle. We had decided that as so many new car launches take place at Goodwood that this was a perfect event for Cynthia to make her Debut. While Mario and Cynthia had the honour of being parked up on display the human’s had an invitation to lunch in the house. Very nice it was to, Champagne, a delicious three course lunch with wine, coffee and beautiful petit fours all served in the ornate splendour of the ball room. It’s a lovely opportunity to meet and chat with fellow members of the club, conversation flows as we all have a common interest. 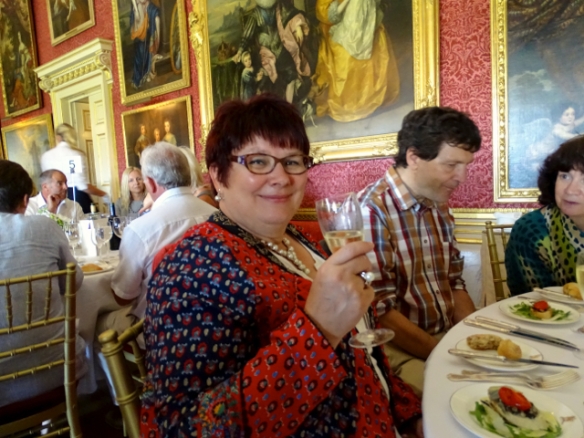 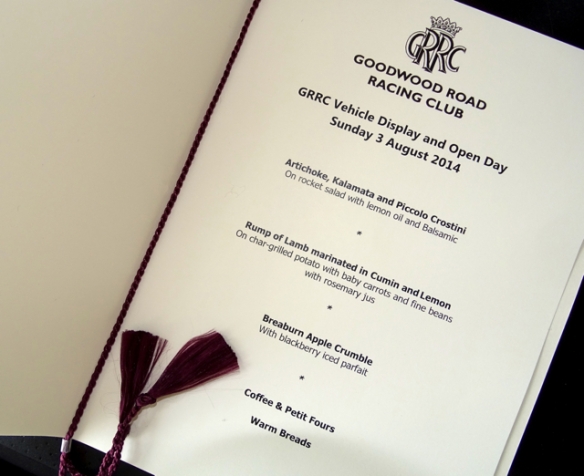 After lunch we had a wander round the other exhibits. They covered a very wide spectrum of motoring history from Veteran bikes to modern super cars and even a Mini Metro. Personally our favourites were the Auburn boat-tailed speedster which had a fantastic alligator interior, a very original Jowett Jupiter with great patina, an Arbath Prototype, an unusual Innocenti and a glorious Alfa 8C. Visitors could vote for their favourite car of the day, third place went jointly to the Auburn and a Mercedes-Benz Roadster, second place was the Alfa and the winners a Volkswagen camper van which had been beautifully restored and was actually used for camping trips, although it did some to have a huge crowd of supporters all hustling for votes! We have it on very good authority that Mario was in the top ten. 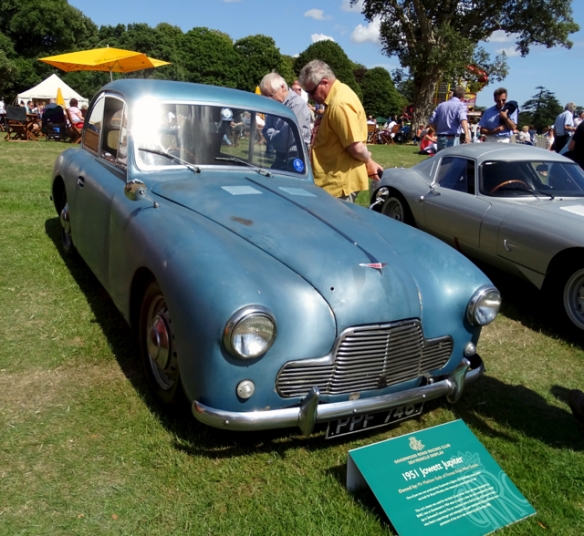 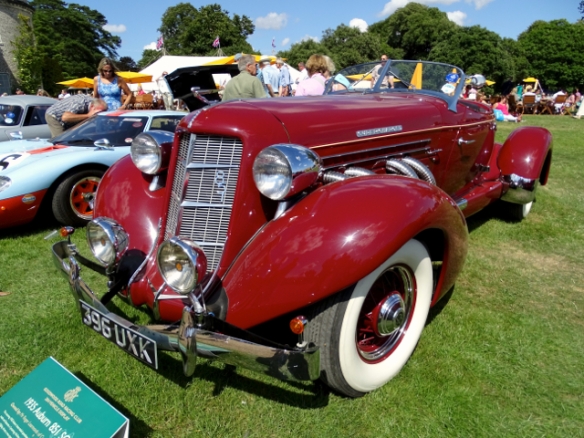 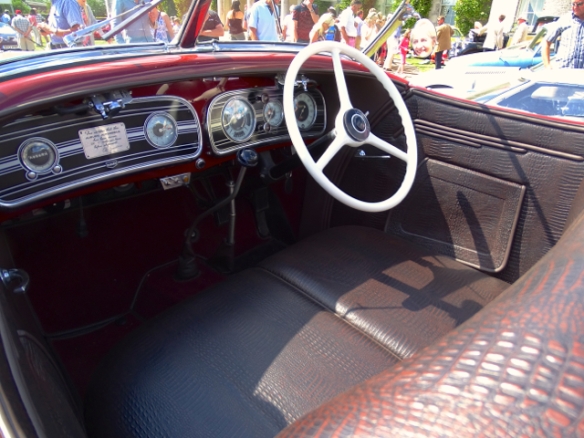 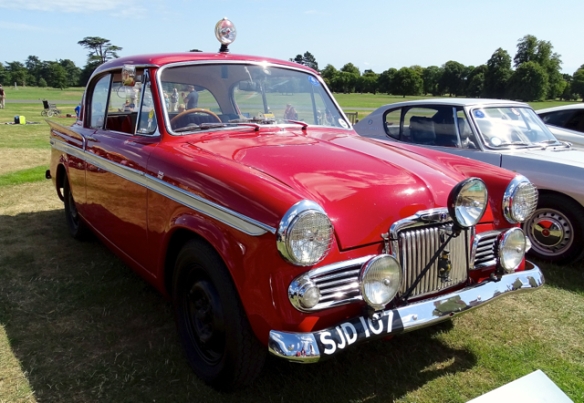 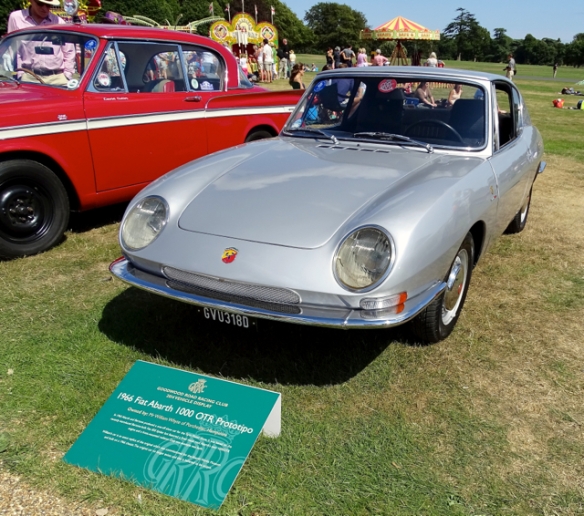 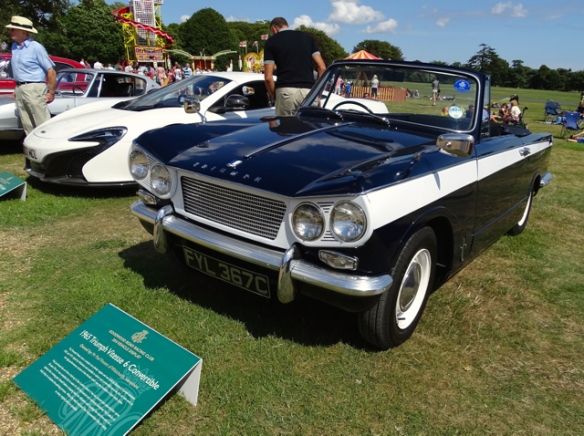 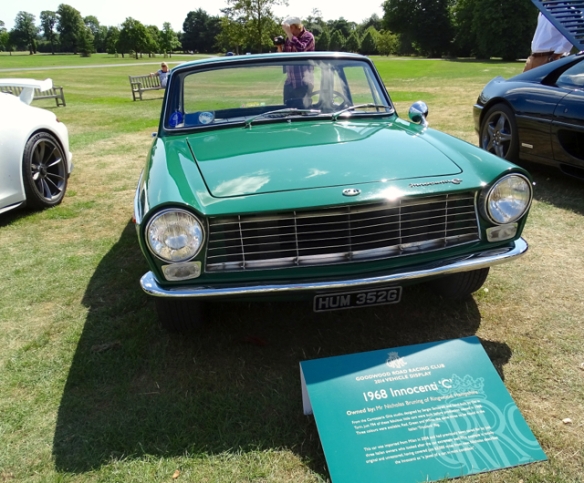 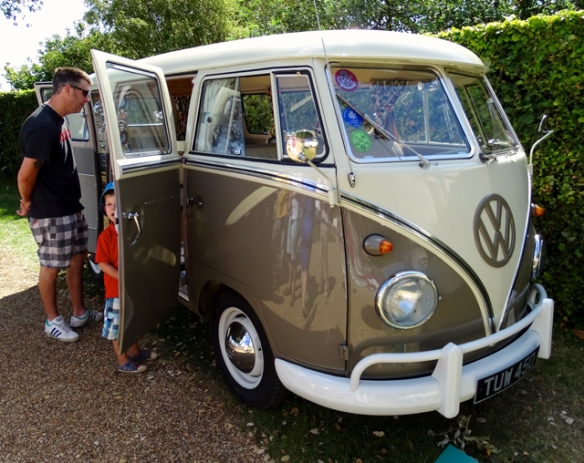 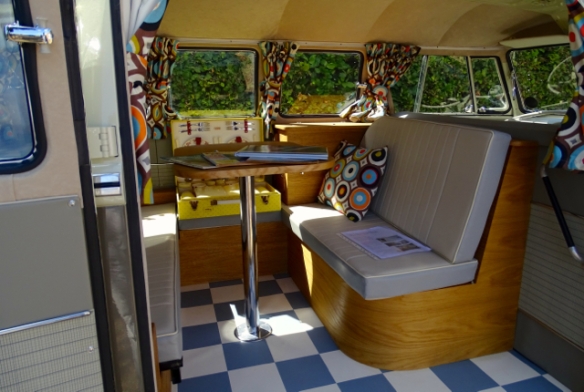 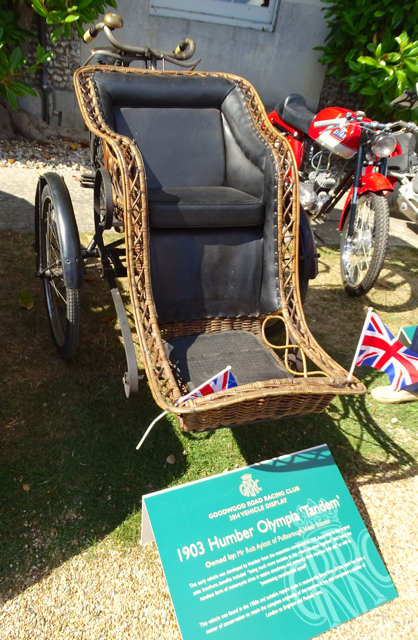 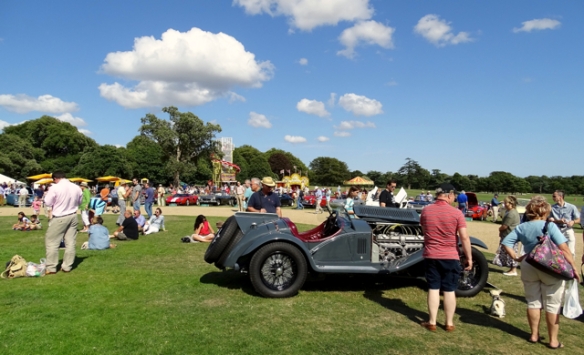 Newly restored Cynthia created a lot of attention and the two together in matching colour schemes certainly made an arresting sight and will blog soon on her restoration. We took the opportunity to take some pictures outside of the house before we left. It was a most enjoyable day in lovely sunshine slightly marred by Mario getting very hot on the way home which is something that has never happened before – maybe he was having a bit of a sulk at Cynthia getting some of the attention – so that is something that will have to be looked at before the Revival. 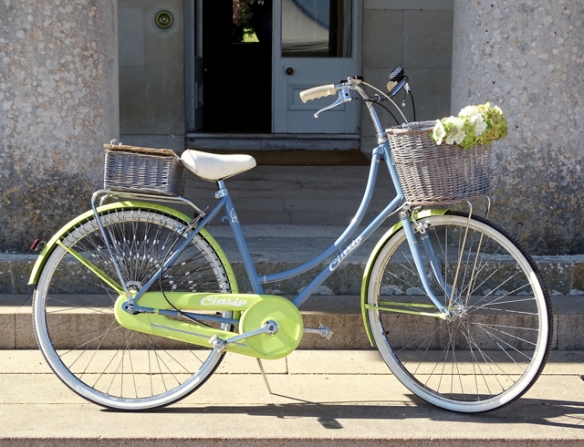