Due to a previous commitments (well OK a party in Devon) we could only make one day of this years Goodwood Festival of Speed. To be fair we weren’t that concerned as these days FoS has become rather modern and Drift cars, Monster trucks and the like don’t interest us. However I wouldn’t want to miss it completely as there are always a few gems hidden away.

The Cartier Style et Luxe is always our favourite and first point of call and although not a classic year there was a class ‘Cheeky Cinquecento’ celebrating the 60th anniversary of the Fiat 500 with some unusual versions.

First up this early first series 479cc Nuova 500, one of the first 15 built it is believed to be the oldest-surviving Nuova 500 in the world! I didn’t realise that the 500 is the only car given exemption from Rome’s ban on older high-emission vehicles entering the city. 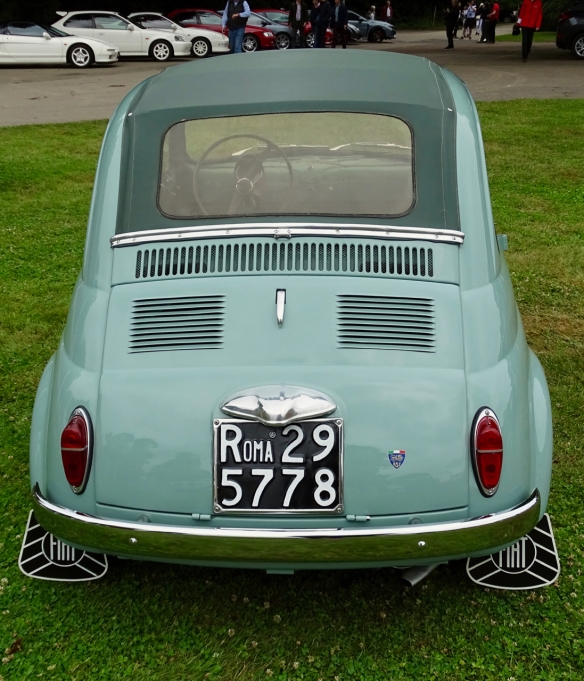 My favourite and the car I would most like to take home was this wonderful 1964 Neckar Weinsberg Coupe. One of many 500 derivatives made under license around the world. Made in Germany by NSU, they were made from partly assembled 500 bodies with different panels and rear lights from the Fiat 1100. 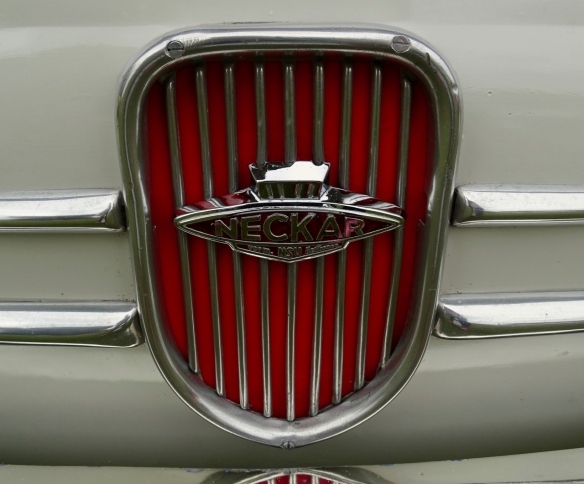 The rather strange but quirky 1967 Ferves Ranger. Built by Ferrari Veicoli Speciali (FERVES), it was unveiled at the 1966 Turin Motor Show. The compact off-roader was designed to be used in vineyards and olive groves. Less then 50 have survived. 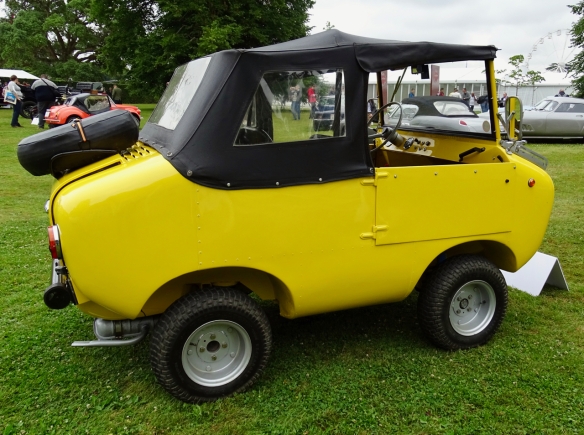 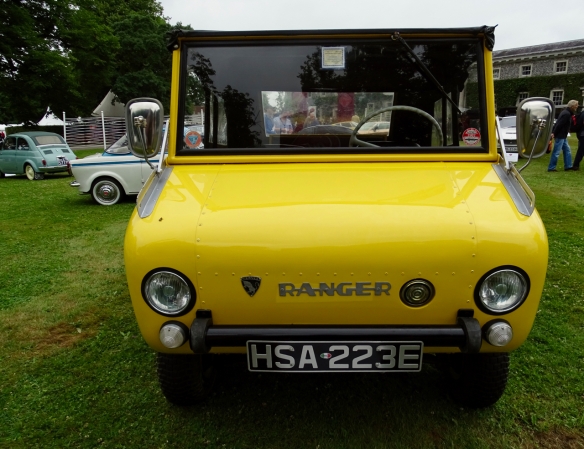 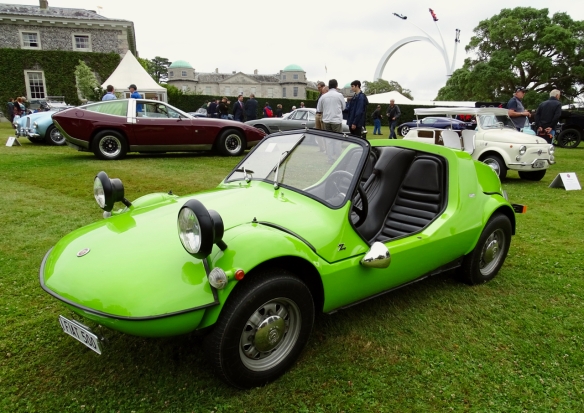 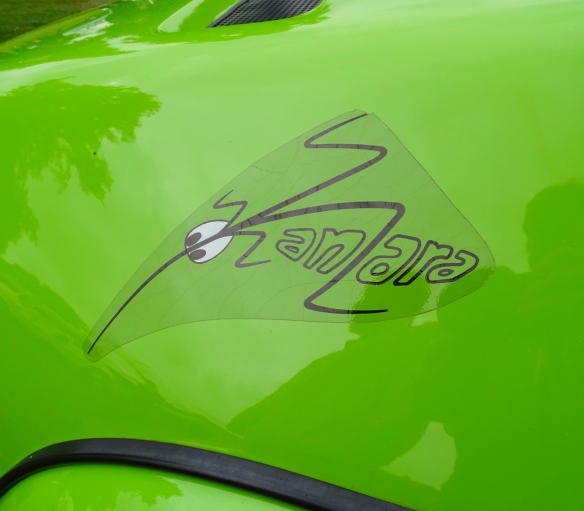 You couldn’t have a display of 500’s without the iconic beach car – this 1960 Ghia Fiat 500 Jolly was known as La Spiaggina in Italy. It cost almost twice as much as a standard 500 but was mainly purchased by the rich and famous to use as golf carts and yacht tenders. 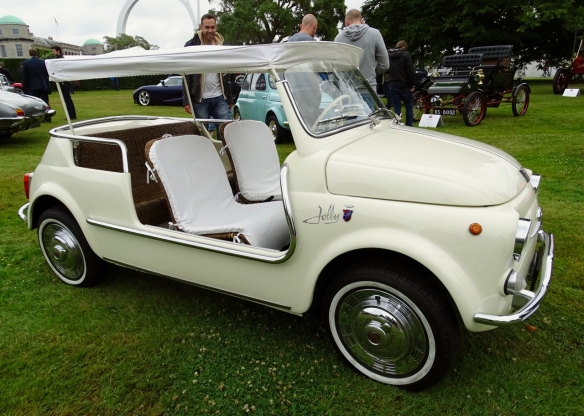 1957 Steyr-Puch 500, made by Austrian company and adapted to suit local demands. A 16bhp flat-twin engine was more suited to the mountainous Austrian roads. This car is chassis number 3, a pre-production prototype. A later developed model the 650TR won the 1966 European Rally Championship. 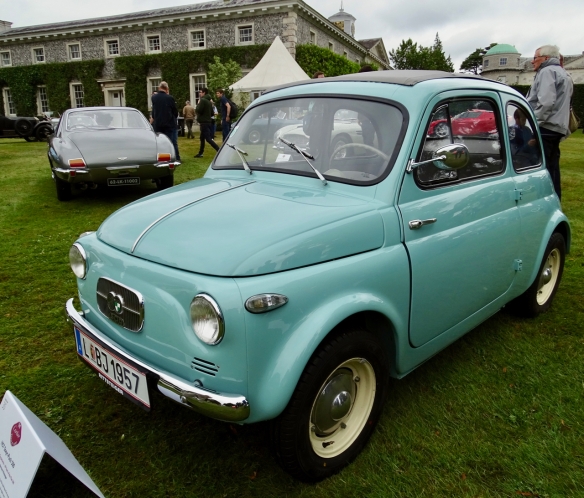 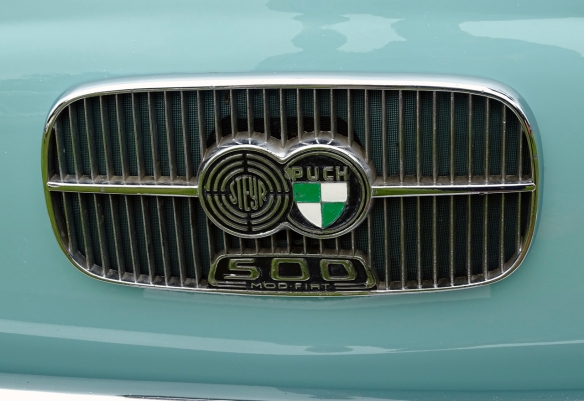 Another car in the Cartier which I rather liked was this impressive Aston Martin DB5 Shooting Brake. Originally designed for David Brown who wanted more room for his polo equipment for his personal use, customers soon wanted one too., Coachbuilders Radford were commissioned to supply the demand as the factory was too busy. Only 12 were built. 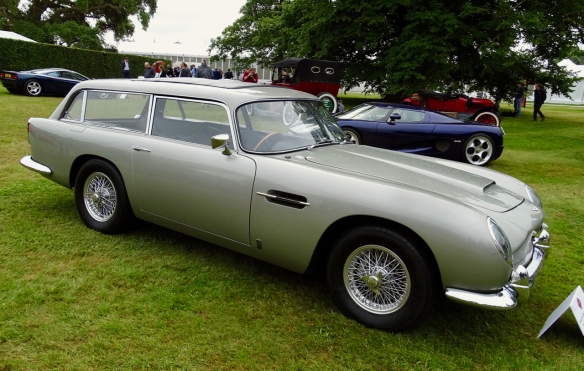 On the BMW display was this fantastic 507, built from 1956-59 it was originally a model destined for the USA, it was too expensive and only 252 were made. Owned by celebrities including Elvis and Bernie Ecclestone. I would quite like one but it’s rather out of my price range, well into 6 figures!

Each years Festival is defined by the Central Feature. Once again designed by Gerry Judah this years was rather unique as it honoured an individual rather than a brand – Bernie Eccelstone. Celebrating the life and career of Bernie the display represented the different eras of his life as a Driver (Connaught), Manager (Jochen Rindt’s Lotus 72), Team Owner (Brabham BT49), Impresario (Ferrari F2001) and Legend (Mercedes W07 2016).

Unfortunately it was rather overcast on Thursday so it didn’t show the sculpture off to its best but it was still pretty impressive and had some great angles – just would have been nicer with blue sky behind it. 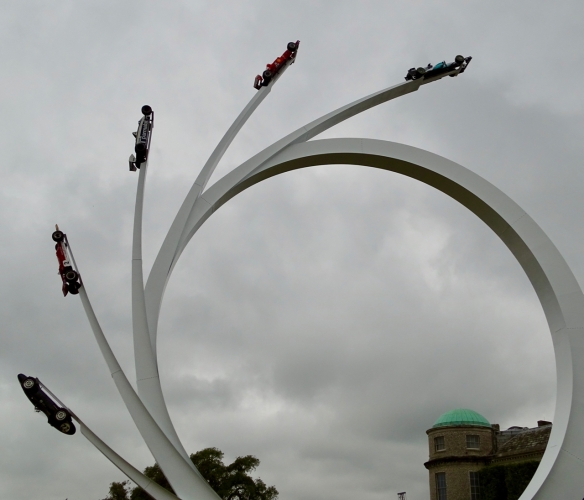 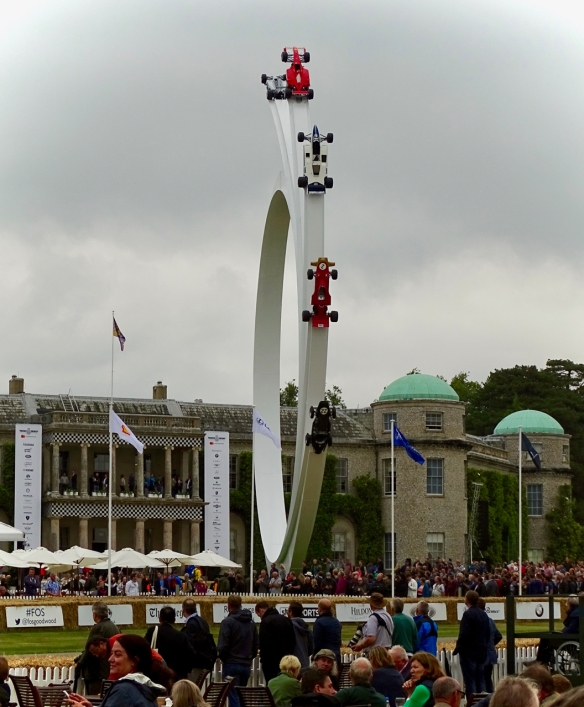 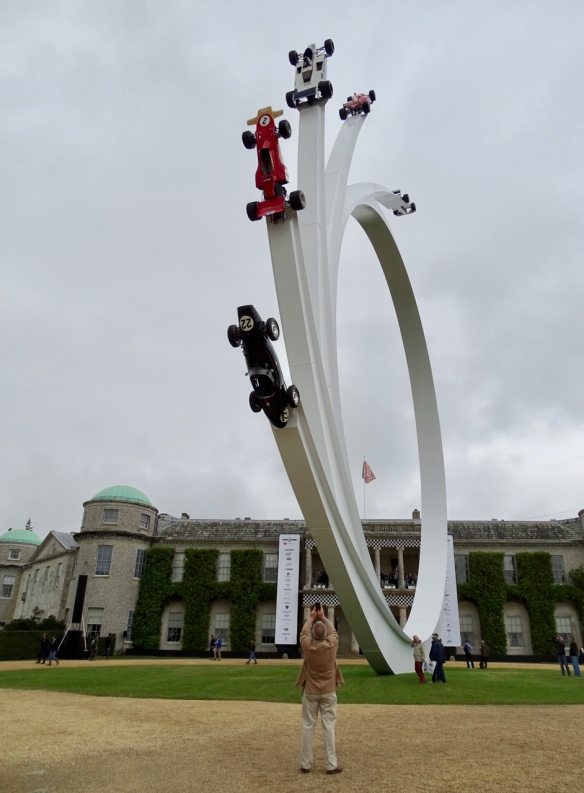 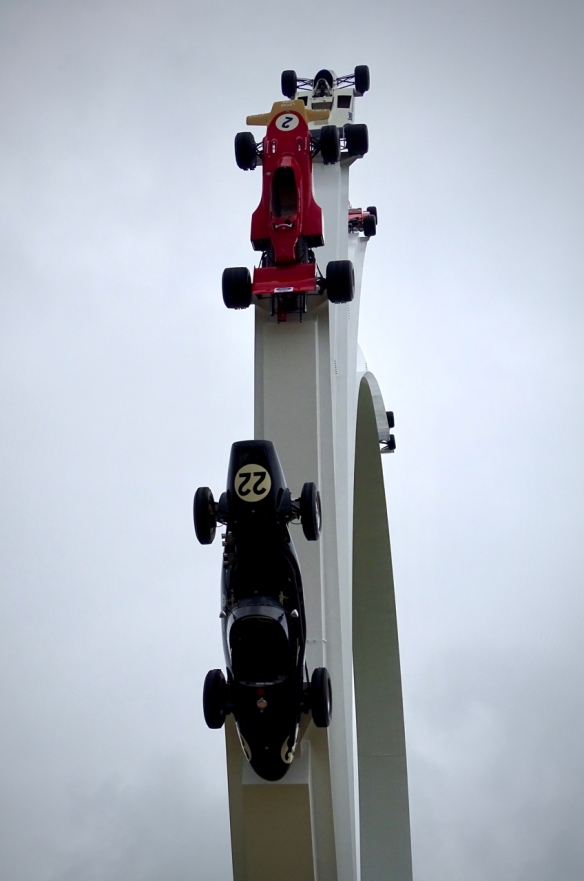 We noticed this rather lovely van in the paddock – A Renault Saviem SG2. Produced from 1965-1982 it was beautifully restored. 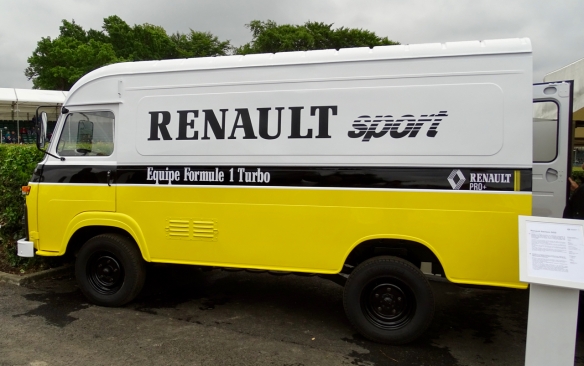 Finally the new Alpine A110 a lightweight turbocharged sportscar from the legendary French marque. I don’t like new/supercars much but we saw the prototype of this at last years festival and thought it was lovely and had still managed to retain the look of the original Alpine. This model is pretty close to the full production model which will be available in 2018 and was making its world debut although I believe it will cost over £50k so it won’t be joining the family! 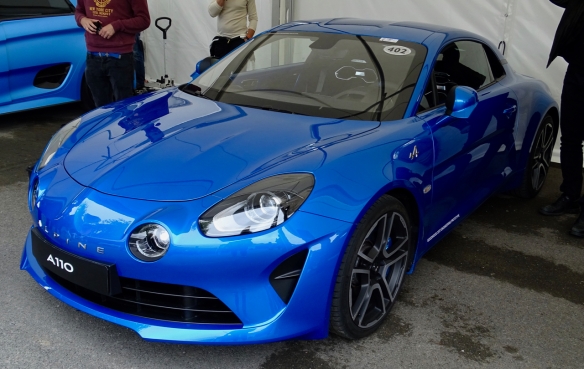 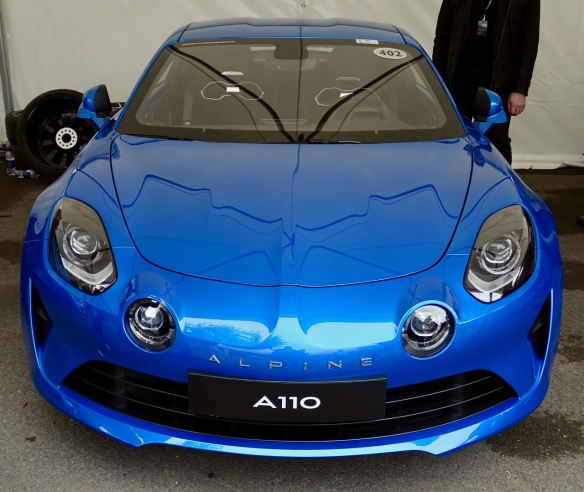 There wasn’t much action on the track on Thursday as it is the Moving Motorshow day but we had a look round the Paddocks with the normal display of current F1, a special class to celebrate Tom Kristensen’s career and some pre-war vehicles which were interesting. We didn’t have time to get to the rally stage which is normally worth a look. There were lots of supercars and newly launched production models which didn’t interest us but made a lot of 6 year old boys very happy!

So all in all we had a pretty good day, no problems with traffic, just a couple of very light showers and it was pleasantly warm and we met up with several friends. But one or maybe two days is enough these days, it’s all a bit new and corporate for our liking – bring on the Revival and then Mario gets to play.