As we are so behind, here is the first part of a brief catch up of what we got up to classic motoring in 2019.

After the Goodwood Members Meeting it was all go organising the car show we hold in our local town. We have been running this in our community for 11 years (we are currently underway with the 12th). We have around 250 cars attend of which nearly a hundred do a 60 mile tour in the morning in our beautiful local countryside. Mario of course is in attendance, he is in fact extremely useful in transporting stuff to and from the show, including ‘Houndtooth’ our Haslemere Hound, for the discerning Gentleman driver which the humans painted as part of a community arts project.

James went off navigating on Hero’s London to Lisbon Rally in a Fiat 2300. This event starts fairly near us at Brooklands and so Jane has an opportunity to go to start and a couple of the stops on the first day before the competitors get the overnight ferry.

The Wander – Jane’s first go at navigating a ‘proper’ event

Organised by some of James’ rally chums this is a fun one day event from Petersfield to Devizes, the long way with some fairly hard challenges along the route. This was my first time at managing maps and clocks but a good time was had and I didn’t make an idiot of herself. While it would have been lovely for Mario to have made his debut it was decided that he was probably a bit slow to keep up and so ‘brother’ Regie was drafted in for the day. Great fun was had, James didn’t get cross, I didn’t cry and Regie run perfectly! We look forward to taking part again.

Part 2 at the Festival of Speed to follow shortly…

…the weather and the cars at the 20th anniversary Goodwood Festival of Speed. 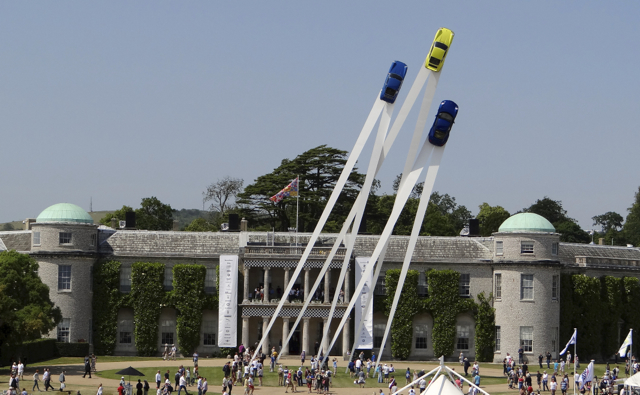 We had several days at the wonderful Goodwood Festival of Speed. Unfortunately there isn’t much point leaving ‘Mario’ parked in a dusty field so he stays at home. Starting on the Thursday which is the ‘Moving Motorshow’ day, this is much quieter and a good opportunity to have a look around without so many people, most of the displays seemed to be in position but it was only modern manufacturers using the hill for test drives.

This years central sculpture was celebrating 50 years of the Porsche 911, taller than ever the minimalist structure soared into the air over the house displaying three 911’s at the top.

Our favourite areas as usual were the Cathedral Paddock and the Cartier ‘Style et Luxe Lawn’ where some absolutely beautiful cars were on display. The fifty years of McLaren feature was also well designed and layed out using quotes and footage of the companies history and the late Bruce McLarens own experiences, the new road cars looked impressive. 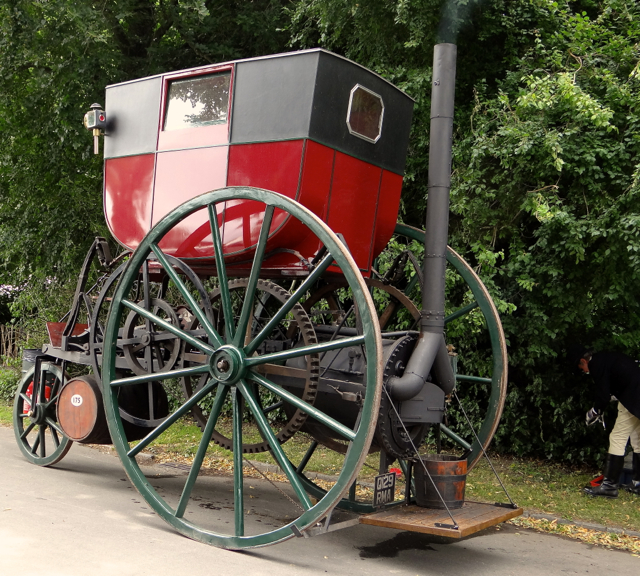 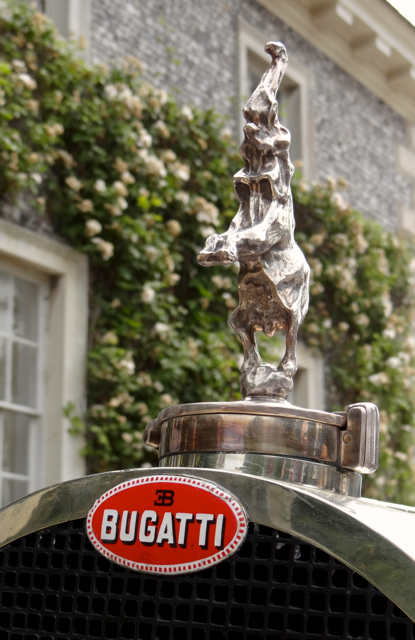 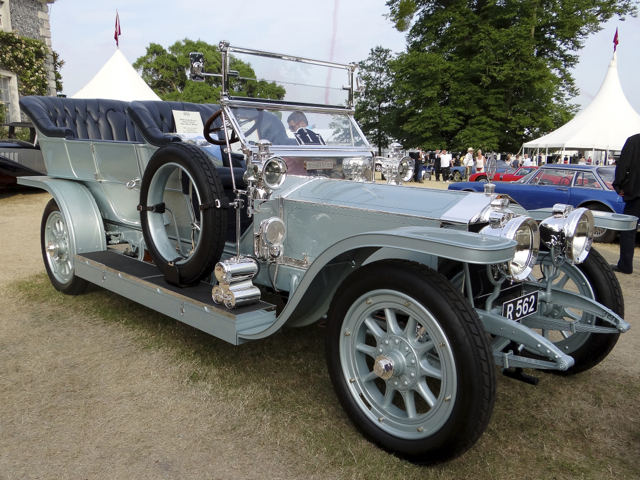 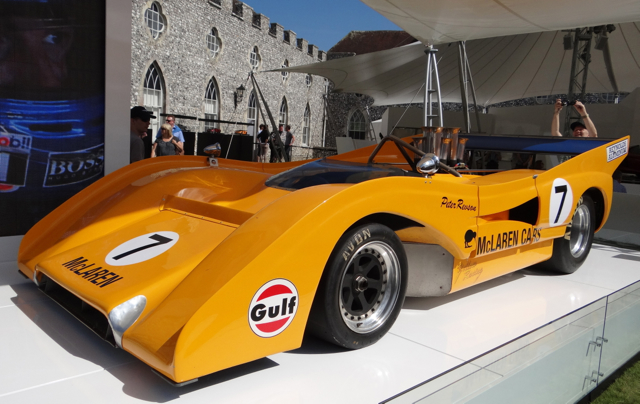 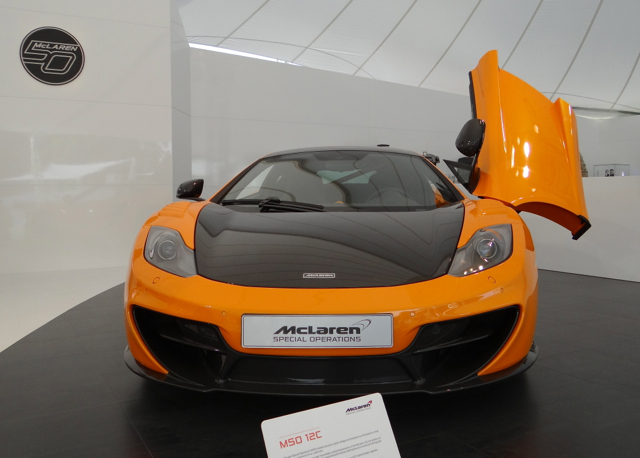 The Bonham’s auction on Friday attracted a great deal of attention, especially when the 1954 Mercedes-Benz W196R Formula 1 Single-Seater became the most valuable motor car ever sold at auction. The car that took five-time champion Juan Manuel Fangio to the second of his Formula 1 world titles achieved a record-breaking figure of £19,601,500 (US$29,650,095, €22,701,864). Although a very famous car with lots of history and the only one not owned by Mercedes it didn’t really look that impressive, it would be difficult to know what to do with it as if it was restored to be raced it would lose all the knocks and scrapes which are it’s history and value. 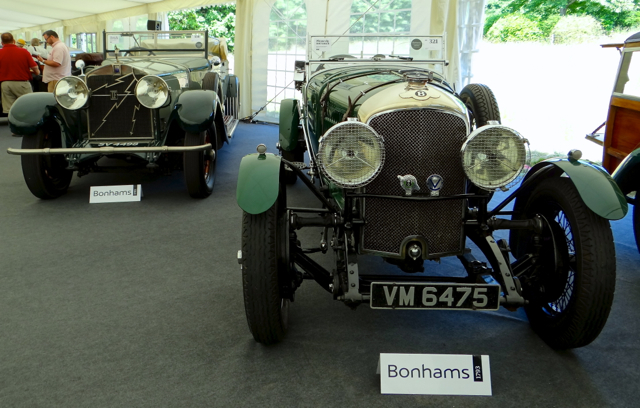 The F1 teams were in attendance as usual with a good smattering of regular and test drivers, the F1 paddock is always so busy and nowhere near as open as in the early days of the FoS when you could chat (and cuddle!) current drivers of the time such as Eddie Irving, these days the drivers have their own minders and are whisked away from the crowds, still it’s closer than you’ll get to them anywhere else. On Thursday I took my Dad for his 80th birthday, he has been a lifelong McLaren fan and the team very kindly let him into their area to take some pictures with the cars, this is what makes Goodwood special. 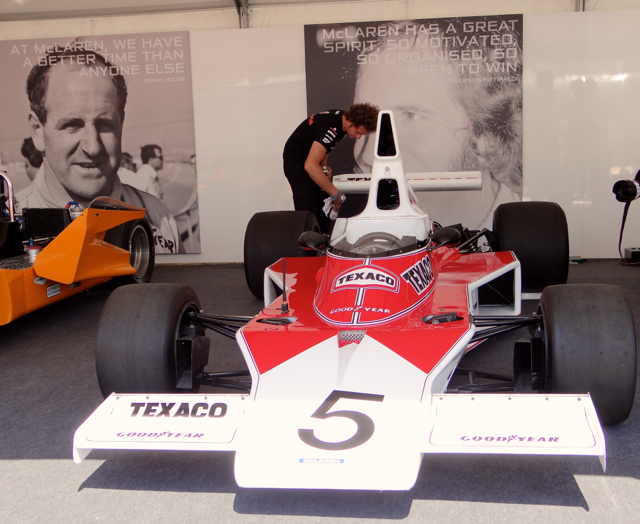 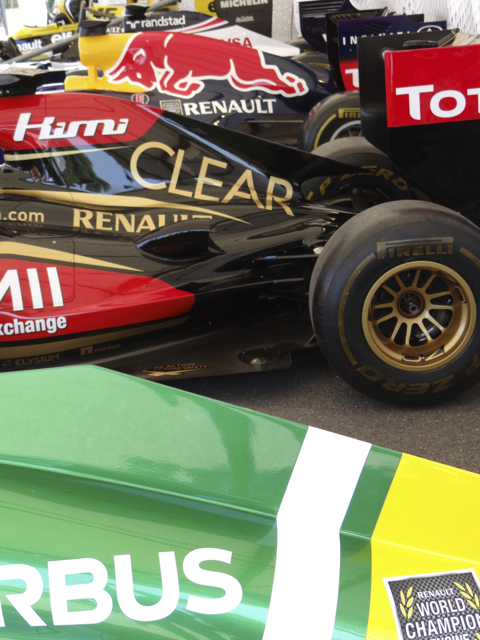 The cricket pitch had been transformed to a strip of desert with some of the greatest land speed cars, the great scene setting was helped by the blazing sun.

On Friday afternoon we made it up to the top of the hill to the rally stage, although rather dusty it was brilliant to see old and new rally cars being driven in anger. 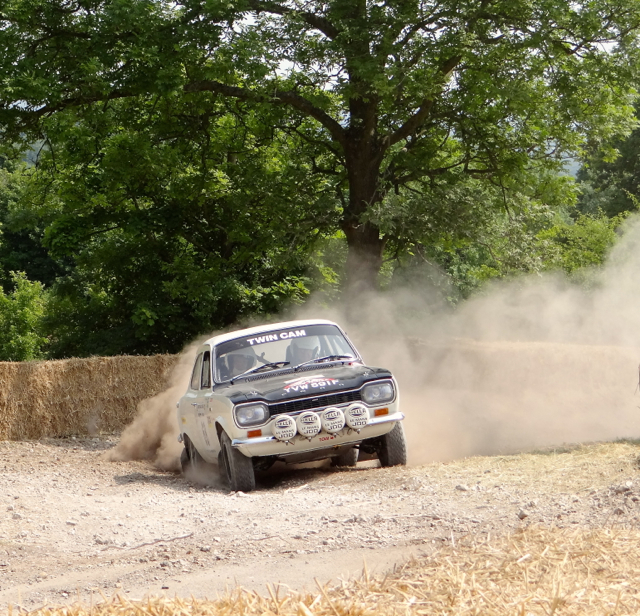 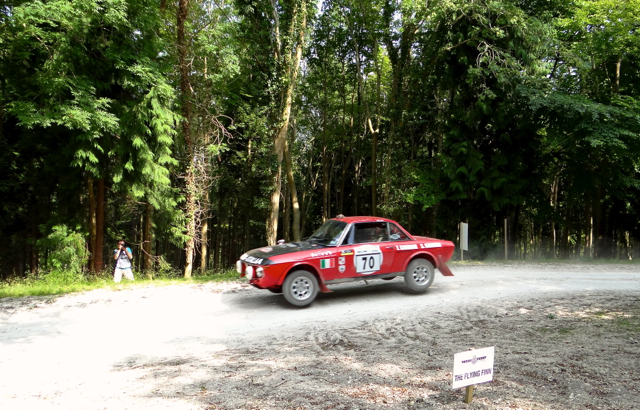 We had a day at home on Saturday but popped down in the evening to see the Ball Fireworks. Always spectacular, they fill the sky and following an amazing show with acrobats, water fountains, motorbikes and this year a McLaren car to celebrate the 20th anniversary of the event. 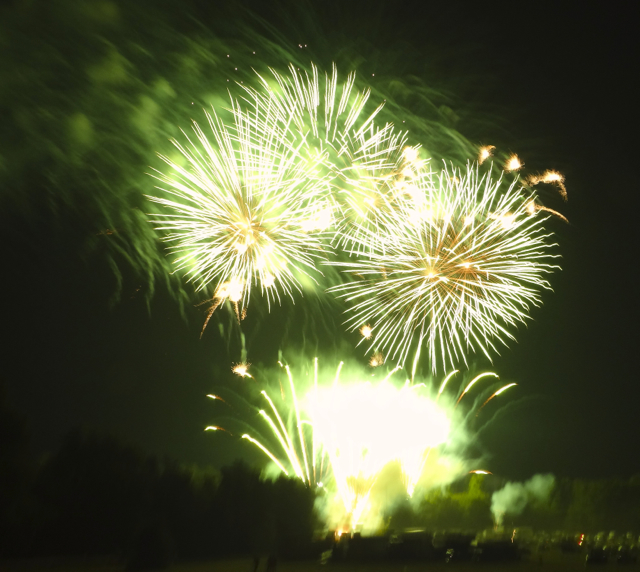 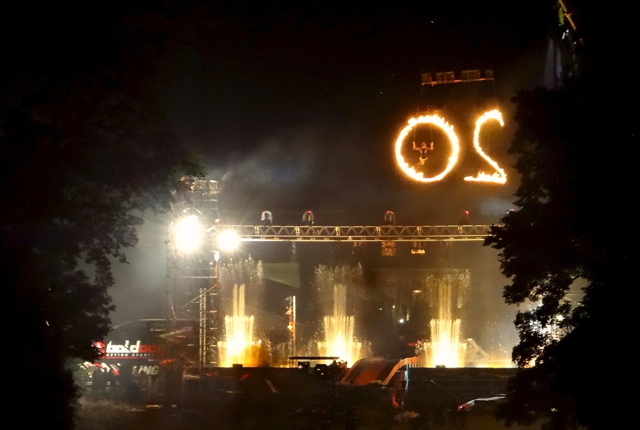 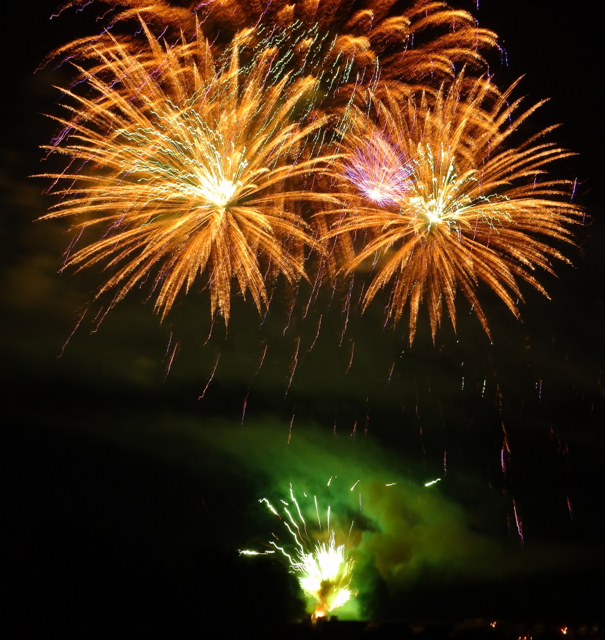 There are loads of stalls, food and major car manufacturers there but I have to praise Ford for a fantastic stand. A ‘scaffold’ tower displaying their new cars with a roof complete with deckchairs for viewing and complimentary photographs and most welcome in the heat, an endless supply of orange lollies, we managed to be at the top for both the Red Arrows Display on Friday and the Eurofighter Typhoon on Sunday as well as watching the twenty years parade go up the hill. 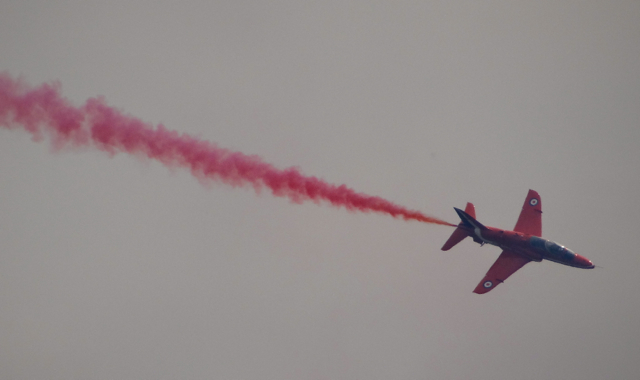 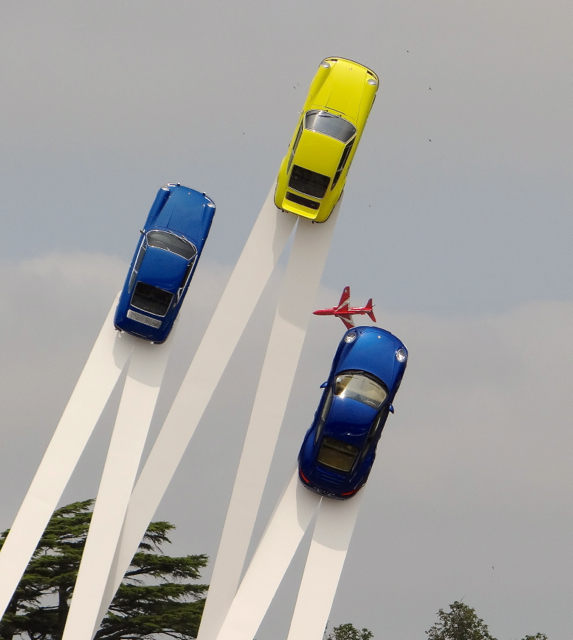 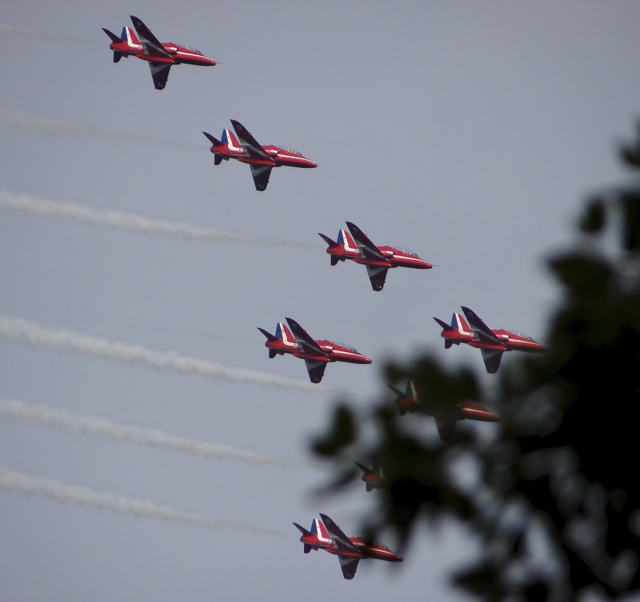 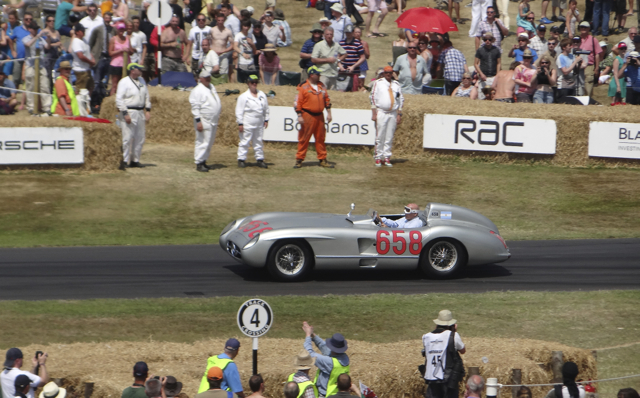 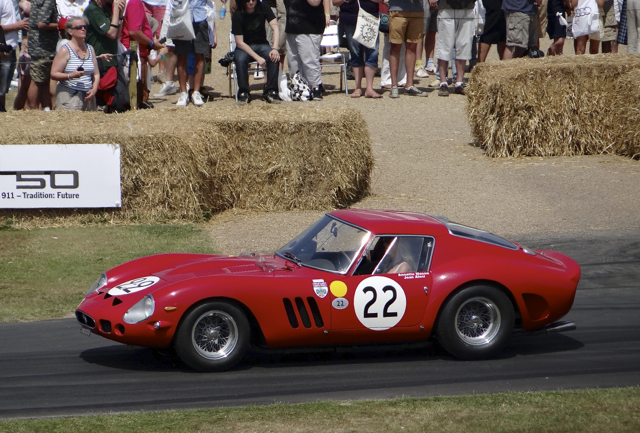 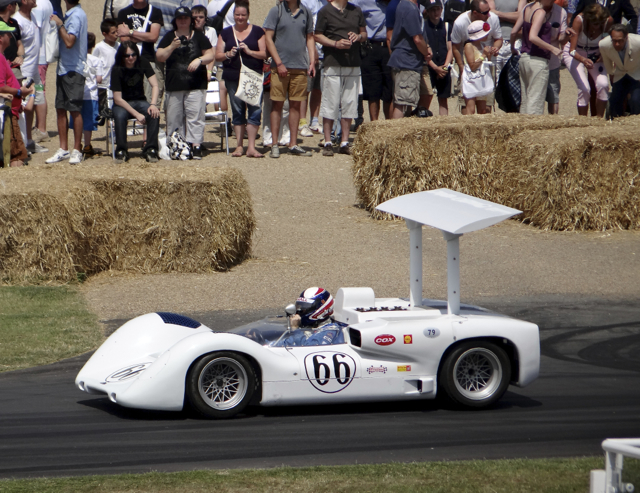 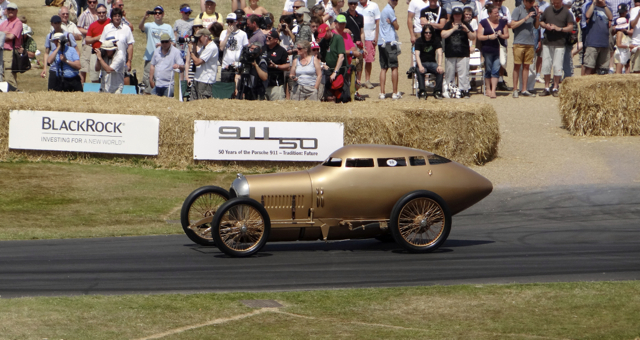 In all it was a relaxed and social weekend, meeting up with lots of friends while being surrounded by some of the world’s most extraordinary vehicles. The weekend finished with the prize giving when Lord March was joined on stage by some of motorsports greats – Sir Stirling Moss, Jochen Mass, Derek Bell, Jackie Ickx, Damon Hill, John Surtees, Emerson Fittipaldi, Kevin Schwantz, Emanuele Pirro, Dougie Lampkin and Peter Fonda. Afterwards we were treated to a set played by the Eagles lead guitarist Don Felder who had performed at the ball the previous night, a great end to a fabulous weekend – sipping champagne in the evening sunshine listening to Hotel California! 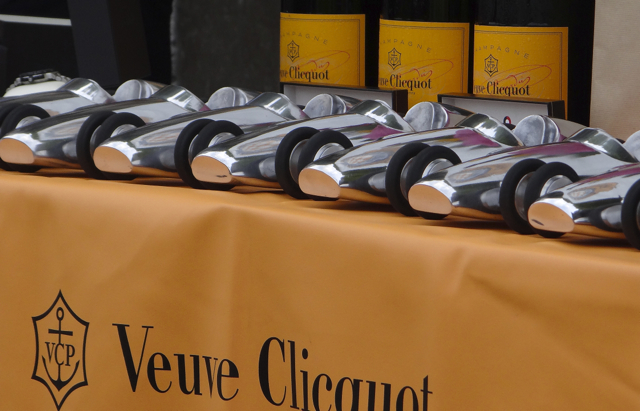 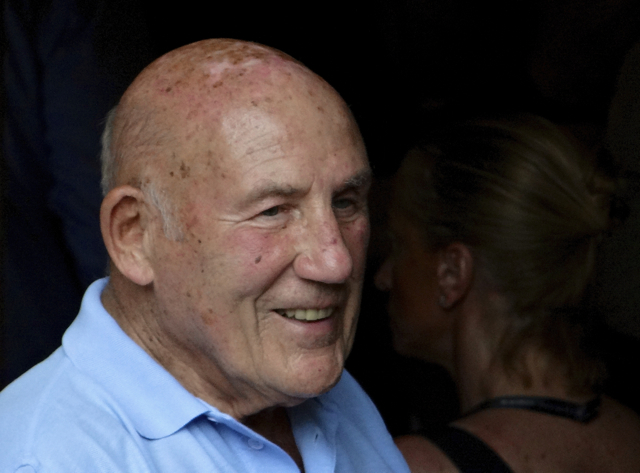 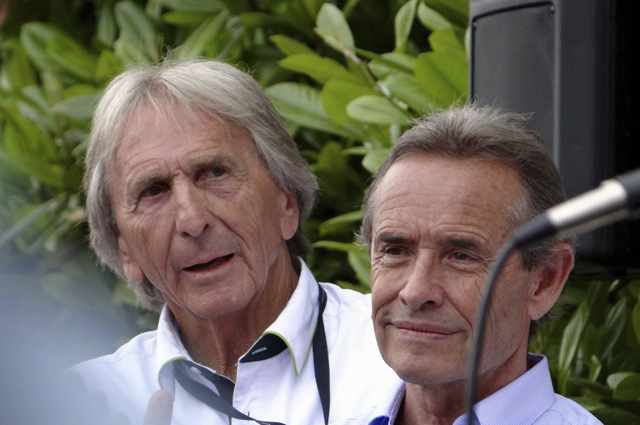