Slightly different type of post but it does contain old boats…

Last year, after the 100th Anniversary of the Battle of Jutland, I discovered that my Great Grandfather had been one of the Victims on the Queen Mary. Shortly after, on one of our regular trips to Southsea, we went to the Navy Memorial on the front and found his name – Edward Coombes. 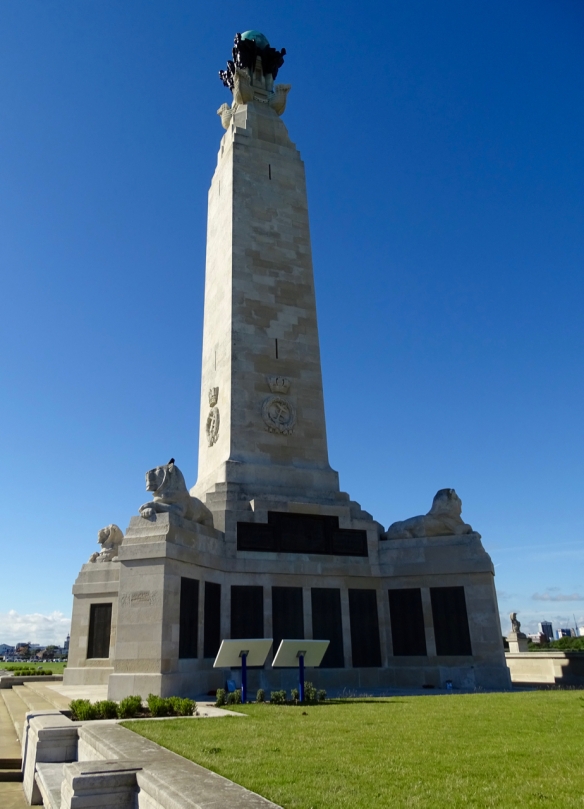 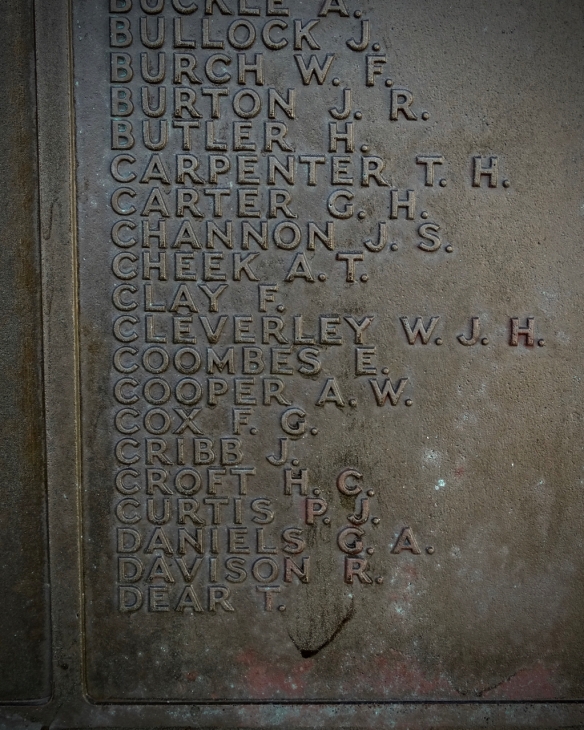 It was quite strange, as at the time, about a month after the anniversary there was just one tribute at the memorial and it must have been someone he would have known, as Edward Coombes was a Chief Stoker on the Queen Mary.

Ever since then we have been planning to go to the Historic Dockyard and visit the new museum telling the story of the 36 hours of Jutland. We finally managed to get there a couple of weeks ago.

36 hours: Jutland 1916 was very interesting and I learnt a lot about what happened. The Battle, which has been controversial over the years, with both sides claiming victory, was actually quite pivotal in the war and although the battle wasn’t a great success as such with huge loss of life and ships, the resulting containment of the German Fleet and blocking of the trade channels helped us to win WWI.

I found my Great Grandfather on the interactive system, I now need to get my Mum to find a photo of him to upload. The Battle on May 31/June 1st 1916 was the largest naval battle of the first World War and took place in the North Sea off the coast of Denmark.

The first shots of the battle were fired at 14.28 and the Queen Mary was one of the early victims of the battle being hit at 16.25. Both forward magazines exploded and she sunk immediately with the loss of all but nine of her 1275 man crew. It was very strange but moving to see all this and know that a family member had been killed but quite comforting to know that as a stoker in the engine room he would certainly have known nothing of what happened. There was very little left or recovered from the wreck and in the whole exhibition the only exhibit from the ship was just a solitary bolt, which in the force of the explosion had landed on the deck of another boat.

Edward Coombes was lost 17 years before my Mother was born and so I have heard very little about him. In total 9823 (6784 British) men lost their lives at Jutland. There is an amazing memorial underway using granite slabs representing the hulls of ships all positioned to make a map of the battle and eventually, they will be surrounded by 9823 stone figures to represent every man lost. This will be on my wish list of places to visit in the future – maybe a Scandinavian holiday in Regie! 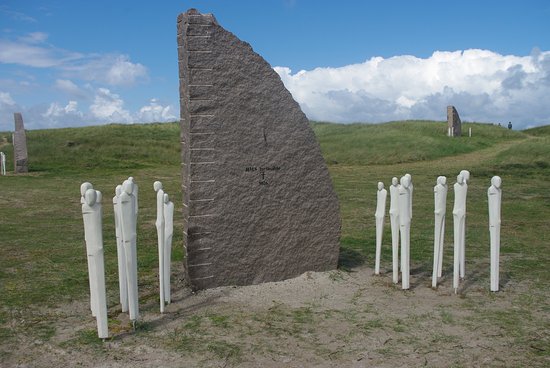 We bought annual passes to the dockland and so we also took the opportunity to visit the Boathouse 4. The boathouse is one of the few surviving examples of 1930s military architecture in the UK. It was originally the workshop for building and repairing a large fleet of small boats used by the Navy including many landing craft which took part in D-Day. Today it is used for restoration projects and boatbuilding skills training. There were some interesting small boats on display including this steam boat. 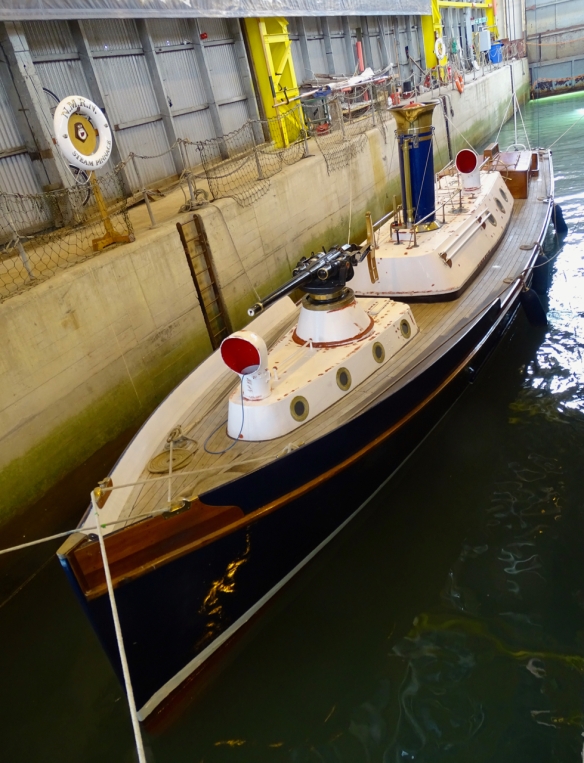 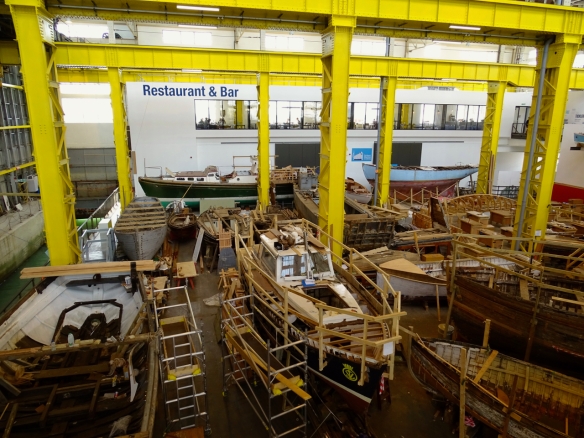 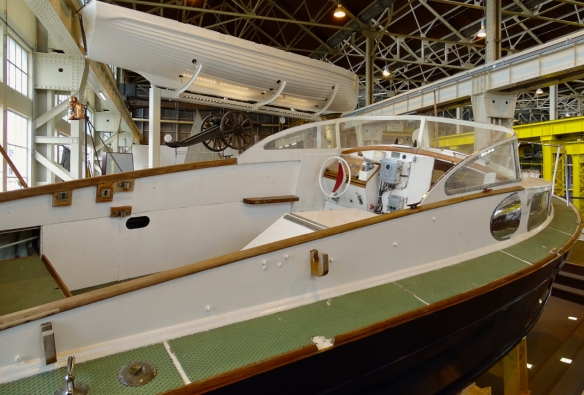 Cockleshell Heroes canoes – used in Operation Frankton a commando raid on shipping in WW2, the plan was for canoes to paddle by night to occupied Bordeaux and attach limpet mines to cargo ships. Only 2 out of 10 men survived but Churchill said that the mission shortened the war by 6 months 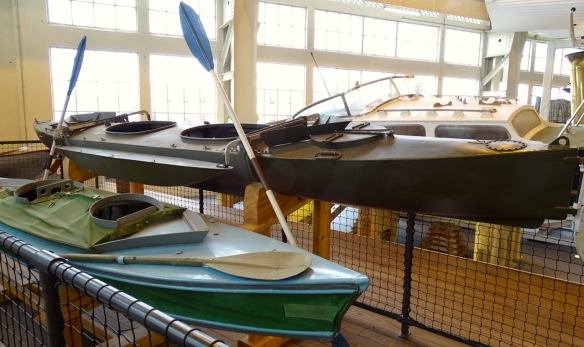 Boathouse 4 also has a lovely new restaurant and bar so we thought it rude not to sample a special edition HMS Victory Navy Strength Gin, distilled on the Isle of Wight.

We’ll be making trips back over the year to visit the other attractions and probably sample some more Gin!